Review: The Talisman of El by Alecia Stone 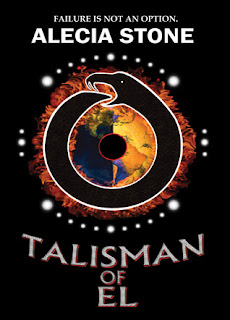 WHAT IF YOUR WHOLE LIFE WAS A LIE?

When 14-year-old Char­lie Blake wakes up sweat­ing and gasp­ing for air in the mid­dle of the night, he knows it is hap­pen­ing again. This time he wit­nesses a bru­tal mur­der. He's afraid to tell any­one. No one would believe him ... because it was a dream. Just like the one he had four years ago - the day before his dad died.

Char­lie doesn't know why this is hap­pen­ing. He would give any­thing to have an ordi­nary life. The prob­lem: he doesn't belong in the world he knows as home.

He belongs with the others.

I love books that deal with mythology, and this one definitely satisfied that aspect of my love of books. This book has more than just angels and demons to it, there were all different characters. It was definitely an interesting book. Alecia definitely did well with the mythology aspect, it felt like she put some research into what she was writing.

This story was packed with action, it is always nice to see a YA book that is non-stop action. I definitely felt that I was on the edge of my seat for most of the book. I will admit there were a few spots where it seemed to slow down and I found myself losing interest at parts. I found that at points the book seemed to jump from one point to the next, which is what took away my interest. There were some difficulties with the flow of the story.

What really interested me about this book was that the main character was a male who was going through all these changes and he is the one that deals with the supernatural. It's been some time since I've read a book with the MC being a male and everything being told from his POV. I also enjoyed that there wasn't any romance happening in this, Alecia focused on the action (it was alluded to happening though).

The characters were a good mix, all coming from different backgrounds. I really enjoyed the friendship that sparks between the four main characters, it's a lot of fun and really makes you want these kids as friends yourself.

Alecia adds in a good amount of humour and sarcasm from the characters as well. This coincides well with all the action happening and does make for an interesting read. Though I had some issues with this book, for a debut author Alecia did well with her story. I do think this story reads a little more like a middle grade book than a YA book, though I can still see older teenagers reading this as well. I am a little interested to continue on with this series to see where Alecia will go next.
Posted by Andrea @ Cozy Up at 9:00 AM