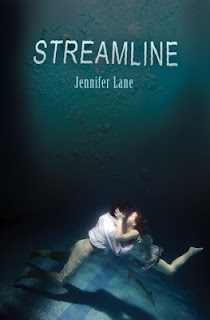 Seems like Leo Scott has it all: looks, brains, and athletic talent. He’s captain of his high school swim team with a bright future in college and beyond. But Leo has secrets. His mother’s crippling car accident has devastated his family and left Leo to deal with his father’s abuse, battered and alone.


Leo’s girlfriend Audrey Rose is poised for her own share of success. As one of ’s top high school swimmers, Audrey dreams of college swimming stardom. But there’s an obstacle to her glorious rise to the top. Her number-one supporter--her father--is in prison for murder.

Part murder mystery, part tale of young love in a military family, this gripping story takes readers on a journey from to . Leo and Audrey must band together to rise above the adversity they encounter and find their true selves in the process. When everything’s on the line . . . streamline.

In the beginning it took me some time to get into this story because it is told from so many different perspectives, but as I got further along it became more interesting and I was excited to see how another one of the characters would think of certain situations. I found this book a quick read because each of the chapters were short and I found myself flying through to see what would happen next with each character.

This is a great story that delves deep into the many different relationships of the characters. Jennifer Lane also really shows how abuse affects everyone differently. I found myself drawn more and more into the story as things progressed and I wanted to see what would happen when everything finally blew up.

I really enjoyed how Jennifer added in a little bit of a mystery to the story as well. Audrey's father is in prison for a murder, but some people don't believe he actually committed the crime. It was really interesting to find out what really happened, I did kind of see it coming but at the same time was still a little taken back.

I felt that I could connect with the characters in this story (which for me makes a great novel). I felt that Jennifer really connected with the emotional side of Leo, which is great because you don't see that a lot in books, a male character showing off their emotions. That was another thing that was enjoyable about the book, the main character was a male (though there were some points where you get Amy's perspective). It was nice to see all the characters connected to one another in different ways.

This was an interesting book and very quick to read, but it definitely deals with a difficult theme, Jennifer really hits the emotional aspect in her writing.

After practice Leo met Audrey in the hallway outside the locker rooms. They were both freshly showered but still wreathed with the scent of chlorine. Leo, for one, was thrilled to smell like a walking swimming pool again.

“Why are you wearing a tank top and shorts?” Audrey asked.

“Ugh.” Audrey looked like she’d eaten something sour. “I’m dead from practice. How can you even think about more exercise?”

He grinned. “I’ll be fine. Will you tell my mom I’ll be late for dinner?”

He snuck his hand around to the small of her back, drawing her close. “I’m glad we’re back swimming together. I missed our post-workout kiss.” He tucked a few strands of wet hair behind her ear, caressing her face.

Audrey gazed up at him.

Leo closed his eyes and inhaled deeply. “You smell like coconut.”

He leaned in to brush his lips across hers, and Audrey surrendered in his arms. They shared tender, lingering kisses as his hands explored the finer points of her physique. He luxuriated in the warmth of her skin as her lithe body molded against his.
Posted by Andrea @ Cozy Up at 8:00 AM