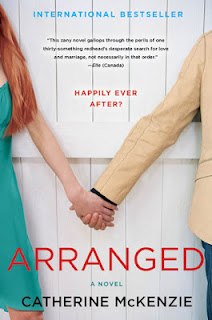 Pages: 416
Received: Received from Harper Collins in exchange for an honest review

Release Date: May 15, 2012 (US, previously released in Canada)
Buy From Amazon.ca

Anne Blythe has a great life: a good job, good friends, and a potential book deal for her first novel. When it comes to finding someone to share it with, however, she just can't seem to get it right.

After yet another relationship ends, Anne comes across a business card for what she thinks is a dating service, and she pockets it just in case. When her best friend, Sarah, announces she's engaged, Anne can't help feeling envious. On an impulse, she decides to give the service a try because maybe she could use a little assistance in finding the right man. But Anne soon discovers the company isn't a dating service; it's an exclusive, and pricey, arranged marriage service. She initially rejects the idea, but the more she thinks about it-and the company's success rate-the more it appeals to her. After all, arranged marriages are the norm for millions of women around the world, so why wouldn't it work for her?

A few months later, Anne is travelling to a Mexican resort, where in one short weekend she will meet and marry Jack. And against all odds, it seems to be working out-until Anne learns that Jack, and the company that arranged their marriage, are not what they seem at all.

I have been hooked on Catherine McKenzie books lately, they are all so much fun, and I definitely need to support the great Canadian writers out there! This book definitely has everything that I love about Catherine's writing, great characters, a hilarious storyline, and the cute ending.

Throughout the story we get to see Anne's relationship issues and what really makes her dive into getting an arranged marriage. She's coming on in age and is ready to settle down and none of her past relationships seem to have worked for her. What person doesn't want that fairy tale relationship, I definitely do, which is why I loved this book so much, I can relate to Anne in that way.

I loved the character of Anne, readers really get to learn a lot more about her because of the mandated therapy sessions she must go through to determine that an arranged marriage is really what she wants and right for her. Though I do have to say my favourite part of the book is Anne realizing what she has just done and figuring out how she will tell her family/friends and how they will react.

The whole book is funny and has that chick lit that I absolutely adore. It's one of those books that you love even though you can sense what is coming. I'm happy to say that I'm a huge fan of Catherine McKenzie (keep it up!) And for those who love to delve into those fun chick lit novels, this is one to pick up.
Posted by Andrea @ Cozy Up at 9:00 AM