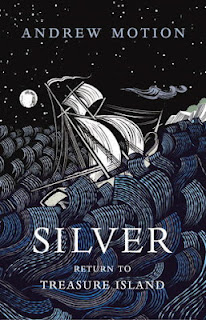 Pages: 404
Received: Received from Random House Canada in exchange for an honest review

July, 1802. In the marshy eastern reaches of the lies the , an inn kept by Jim Hawkins and his son. Young Jim spends his days roaming the mist shrouded estuaries, running errands for his father and listening to his stories in the taproom; tales of adventures on the high seas, of curses, murder and revenge, black spots and buried treasure - and of a man with a wooden leg.


Late one night, a mysterious girl named Natty arrives on the river with a request for Jim from her father - Long John Silver. Aged and weak, but still possesing a strange power, the pirate purposes that Jim and Natty sail to in search of Captain Flint's hidden bounty the "beautiful bar silver" left behind many years before. silver has chartered a ship and a hardy crew for this purpose, whose captain is waiting only for the map now locked away at the .

Making haste from , Jim and Natty set off in the footsteps of their fathers, their tentative friendship growing stronger day by day. But the thrill of the ocean odyssey gives way to terror as the Nightingale reaches it's destination, for it seems that is not as uninhabited as it once was...

Featuring a cast of noble seaman, murderous pirates, and stories of love, valour and terrible cruelty, Silver is a worthy sequel to Treasure Island - one of the greatest adventure stories ever told - and a work of extraordinary authenticity and imaginative power from one of England's greatest writers.

I absolutely loved Treasure Island by Robert Louis Stevenson when I read it in university. It was full of action and it was just so much fun to read. So when I got the chance to read a sequel to Treasure Island I had to jump at the chance. Motion did a great job recreating the story in a different time.

This story had the exact same feel as Treasure Island did when I first read it. Motion wrote in the same style as Robert Louis Stevenson did for Treasure Island, I felt that I was reading the same author at times. It has been some time since I read Treasure Island, but you definitely don't need to read it before reading this one. Motion also gives a very quick recap into what happened to Jim Hawkins at Treasure Island. There isn't much detail, it was about a two page recap, which will be nice for readers who want the refresher.

I did find that there were a few points in the story where it moved a little slow, and I found it took me a little longer to get through those sections. But I am very glad I stuck through those parts, the action scenes that you get to are fun and definitely worth the read.

I also really enjoyed the characters that are introduced throughout. There is a wide range of personalities found in the book, it makes for a fun adventure. It was also enjoyable having the children of Jim Hawkins and Long John Silver take on this journey, if you know Treasure Island you can see similarities and differences of the characters. Plus as an added bonus you get to see some characters return in this novel as well!

I recommend this book for fans of Treasure Island, as well as fans of a great adventure into the unknown!
Posted by Andrea @ Cozy Up at 9:00 AM