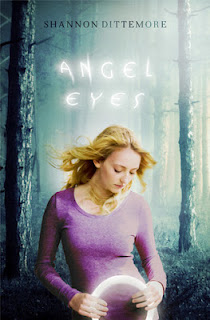 Once you’ve seen, you can’t unsee. Everything changes when you’ve looked at the world through . . .

Brielle’s a ballerina who went to the city to chase her dreams and found tragedy instead. She’s come home to shabby little Stratus, Oregon, to live with her grief and her guilt . . . and the incredible, numbing cold she can’t seem to shake.

Jake’s the new guy at school. The boy next door with burning hands and an unbelievable gift that targets him for corruption.

Something more than fate has brought them together. An evil bigger than both of them lurks in the shadows nearby, hiding in plain sight. Two angels stand guard, unsure what’s going to happen. And a beauty brighter than Jake or Brielle has ever seen is calling them to join the battle in a realm where all human choices start.

Angel books seem to be what everyone is writing about lately (a nice change from all the vampire books). But I am just starting to get into them, I haven't read many (I don't really want to get into the habit of getting bored with the new books coming out). This book definitely caught my attention though, and I'm glad I picked it up. I did find when reading this book that there was a strong religious tone to it, but I easily got past that and into the story of what was happening.

I did find that the beginning of the book was a little slow, and it took a bit of time to get into the story of the angels and how everything fit into the story. But stick with the story and it is quite interesting. With all the angel books out there I feel that Dittemore took a different turn with her story and with the angels. What really got me was how she incorporated fallen angels into her story.

I really found the characters in this book captivating, they are really the reason that I kept on with this book despite the religious tone. Brielle was a character who is easy to connect with and sympathize with what she has to go through. Brielle really struggles with the grief of her best friend's death which takes a toll on her life.  The gift that Jake has was not what I was expecting at all, I found I was surprised with a lot that happened in the book in the fact that I was expecting one thing and it would come out to be something different.

There were a lot of different POV's throughout the book, which took away from the story a bit because I felt I was moving around so much, but a few of the POV's were few and far between and only came at what I see as important parts. It was nice to see a POV from the evil side as well as the protectors side and then from the normal characters (who take up most of the story).

The ending of ANGEL EYES gives a nice resolution to readers. There is a part to the ending that makes you want to come back to see more, but it's nice to see that the new book in the series will be a continuation of their journey together. Check this one out, if you're interested in the angel books.
Posted by Andrea @ Cozy Up at 9:00 AM