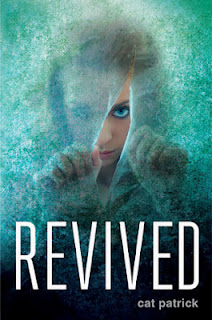 As a little girl, Daisy Appleby was killed in a school bus crash. Moments after the accident, she was brought back to life.

A secret government agency has developed a drug called Revive that can bring people back from the dead, and Daisy Appleby, a test subject, has been Revived five times in fifteen years. Daisy takes extraordinary risks, knowing that she can beat death, but each new death also means a new name, a new city, and a new life. When she meets Matt McKean, Daisy begins to question the moral implications of Revive, and as she discovers the agency’s true goals, she realizes she’s at the center of something much larger—and more sinister—than she ever imagined.

This book drew me in with a gorgeous cover (I love the greenish-blue to it) and a really interesting synopsis. I knew I had to read it! The beginning really draws you into the book and makes you understand the importance of "Revived".

This book is one that is about life and death brought together and it really deals with the emotional side of things throughout. The book opens up with Daisy dying (again). It is a very interesting set up to start out with death when this is a book that is really about life. I really enjoyed Cat's writing, she really connects with all the characters in the story.

Personally going into the story I was expecting a little more action and drama to happen throughout but it read a little more like a contemporary novel, with scientific aspects added in to make it a little more dramtic, along with other things that happen (which I can't say without spoiling it). It was surprising but still very well done. There were still a few dramatic parts that really get you to jump up and wonder what is happening.

Cat shows how with everything Daisy has been through she decides to live differently and try to connect with new people and make new friends. I really loved the character of Daisy, she learns to question what is actually happening and she takes control to find things out. She has this drive to do what she believes is right.

It was interesting to see how Daisy changes for herself and really grows through everything. After everything that happened I felt that the ending was a bit of a let down for me. I felt that the there is still so much more to Daisy's story, almost like Cat could have written another book to follow. Despite all that, this was definitely an interesting book, and I flew through it. I wanted more of Daisy, Matt, and Audrey (especially Audrey).

This was an emotionally charged book just because of how you see Daisy deal with death after dying herself so many times. I recommend this book for sure!
Posted by Andrea @ Cozy Up at 9:00 AM