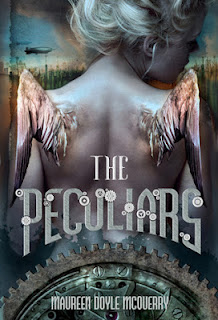 This dark and thrilling adventure, with an unforgettable heroine, will captivate fans of steampunk, fantasy, and romance. On her 18th birthday, Lena Mattacascar decides to search for her father, who disappeared into the northern wilderness of Scree when Lena was young. Scree is inhabited by Peculiars, people whose unusual characteristics make them unacceptable to modern society. Lena wonders if her father is the source of her own extraordinary characteristics and if she, too, is Peculiar. On the train she meets a young librarian, Jimson Quiggley, who is traveling to a town on the edge of Scree to work in the home and library of the inventor Mr. Beasley. The train is stopped by men being chased by the handsome young marshal Thomas Saltre. When Saltre learns who Lena’s father is, he convinces her to spy on Mr. Beasley and the strange folk who disappear into his home, Zephyr House. A daring escape in an aerocopter leads Lena into the wilds of Scree to confront her deepest fears.

The synopsis was very intriguing and I was really interested with the idea of Peculiars. Sadly, this book was not what I thought it would be. I was actually quite disappointed with the story, and had some troubles finishing it (almost DNF-ed it but got through it).

The story had a very interesting idea to it, I enjoyed the Peculiars and why they were unacceptable to society. What was difficult was that it was not explained throughout the story as to why exactly Peculiars were hated in society or how they came about. Is it just a birth defect or is there something more to it? I wanted more of an explanation.

I found that the story was very slow going, it didn't seem that much was really happening throughout. I also found that by the time the story got into things it all of a sudden just ended. I just found that everything dragged on. The ending also went along with everything in the book, it wasn't much of a surprise ending and it just seemed to be just like any other part of the story.

I also found I couldn't connect with any of the characters especially Lena. I wasn't a fan of how Lena acted throughout the book, for someone who is 18 she seemed to have an attitude of a very young girl and didn't seem to know much about what was going on around her.
Posted by Andrea @ Cozy Up at 9:00 AM