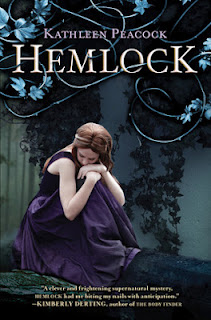 Pages: 404
Received: Won from the author

Mackenzie and Amy were best friends. Until Amy was brutally murdered.

Since then, Mac’s life has been turned upside down. She is being haunted by Amy in her dreams, and an extremist group called the Trackers has come to Mac’s hometown of Hemlock to hunt down Amy’s killer: A white werewolf.

Lupine syndrome—also known as the werewolf virus—is on the rise across the country. Many of the infected try to hide their symptoms, but bloodlust is not easy to control.

Wanting desperately to put an end to her nightmares, Mac decides to investigate Amy’s murder herself. She discovers secrets lurking in the shadows of Hemlock, secrets about Amy’s boyfriend, Jason, her good pal Kyle, and especially her late best friend. Mac is thrown into a maelstrom of violence and betrayal that puts her life at risk.

Kathleen Peacock’s thrilling novel is the first in the Hemlock trilogy, a spellbinding urban fantasy series filled with provocative questions about prejudice, trust, lies, and love.

Wow, this book was absolutely amazing. Kathleen Peacock did a great job with her story. I love that this is the year that all the darker stories are coming out. With all the werewolf and vampire books out there this one is a nice difference (Not that there are vampires in this book though!) This is a supernatural story with a  love story intertwined, as well as a murder mystery and even some politics inserted in there. Kathleen just adds everything to this story and it works amazingly well!

I was drawn to this book right from the beginning. Kathleen opens up the book with such a haunting scene, and from there it is impossible to put this book down. Everything just seems to move so quickly in this book, but it works for this story. Kathleen weaves the background of Mackenzie and her friends into the story so it's not like other books where you start with the background before getting into the story.

This book was packed with action, secrets and lies from all the characters. I found myself thinking one thing and Kathleen would turn the story around that I could not think about what was coming next. And I will be honest I did not see that ending coming, I was completely thrown with what Mac and her friends find out. Kathleen did a great job adding in an extra level of creepiness to the story by having the scenes of Amy and Mackenzie, I absolutely loved those scenes, they actually gave me chills at points.

Mackenzie is a very well written character. I enjoyed how she tries to be strong for everyone around her in her own way. She is a character that spends more time thinking of others than herself (not to say she doesn't have her selfish moments, who doesn't).

This is definitely a book for you all to check out. If you like mystery, supernatural and some romance check this one out!
Posted by Andrea @ Cozy Up at 9:00 AM