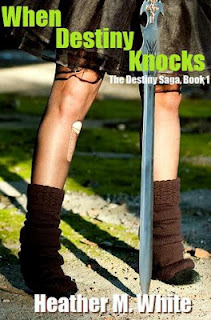 16 year old Karlie has had a pretty normal life... But when her Mom dies she is forced to move over 1,000 miles away to live with her Dad. That's when things start getting weird.

She can't explain the earthquakes that nobody else feels, or why she no longer sleeps. But most of all she doesn't know why she trusts Shane so much, even though his Dad wants her dead.

Suddenly, Karlie's normal life is turned upside down and she enters a world she never dreamed could really exist.

When Destiny Knocks was an interesting story for me. It was nice and short, so I just flew through it (read it during my 2 hour commute home from work). I really enjoyed that this story had a lot of different magical creatures in the story (it was a little like The Iron Fey series in that way).

I do have to say that for such a short story it was a little slow going and took time to get into what was actually going on. But I did find that for a short story I did not feel like things were left out, even knowing that this is the first part of a series. I was expecting a little more action to the story after reading the synopsis, but there was not all that much, because Heather spent this story getting into the background of everyone around.

I did find the story interesting, there was a good amount of comedy (in sarcasm) added, which I really enjoy in these kind of stories. The beginning of the story does make you wonder where the whole story is going, and I was more intrigued with the story as I went on and Katie started feeling these things that no one else around her could sense.

The one thing that I wasn't a fan of was the whole instant attraction between some of the characters, I've seen it too much and it just isn't believable for me. Despite that (and a few spelling/grammatical errors that distracted me a little throughout) the book was well written and interesting at times. I am still interested to see what will happen next following the ending of this book.
Posted by Andrea @ Cozy Up at 10:00 AM