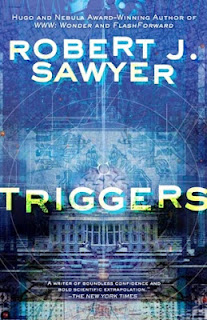 Pages: 352
Received: Received from publisher in exchange for honest review

On the eve of a secret military operation, an assassin's bullet strikes President Seth Jerrison. He is rushed to the hospital, where surgeons struggle to save his life.

At the same hospital, researcher Dr. Ranjip Singh is experimenting with a device that can erase traumatic memories.

Then a terrorist bomb detonates. In the operating room, the president suffers cardiac arrest. He has a near-death experience-but the memories that flash through Jerrison's mind are not "his" memories.

It quickly becomes clear that the electromagnetic pulse generated by the bomb amplified and scrambled Dr. Singh's equipment, allowing a random group of people to access one another's minds.

And now one of those people has access to the president's memories- including classified information regarding the upcoming military mission, which, if revealed, could cost countless lives. But the task of determining who has switched memories with whom is a daunting one- particularly when some of the people involved have reason to lie...

I haven't read a lot of science fiction books, but when I saw the synopsis of this I was really intrigued, it seemed to have a lot of psychology attached to it as well and I was really interested. I found myself really invested in what was happening throughout the book.

Usually, I find that when I read scientific books like this one the author sometimes makes it difficult to understand some of the terms and how some of the things work. But in this book, Robert J. Sawyer makes the scientific aspect of what is happening easy to understand for those readers that are not savvy in scientific terms. What I really enjoy though is that he does not write it in a condescending way, making readers seem less knowledgeable.

I could not stop reading this book, I found that from the beginning there was non-stop action happening. Right from the beginning you jump right into everything with the President getting shot, and from there everything seems to happen quickly. It was interesting to read the descriptions of people being able to read other's memories, Robert does an amazing job of putting in the details of each person's life. Not everything is revealed right away, as a reader you learn about each character through the other characters, which made for a very interesting and unique read.

I do admit I was nervous when I first started reading this book because the book jumps around from character to character quite often. I thought it was going to be a little hard to follow with so many characters, but Robert takes control and really makes it easy to know who you are with and the character jumps do not take away from the story.

I definitely recommend this book for lovers of science fiction (and an added bonus, the author is Canadian!) This book definitely has a very interesting concept to it and I would happily read it again. I believe this is one of those books that you miss things the first time you read it again, and the more you read it the more you will find.
Posted by Andrea @ Cozy Up at 11:00 AM