Review: Birthdays for the Dead by Stuart Macbride 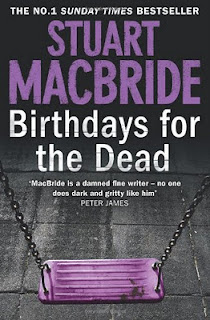 The gritty new standalone crime novel from the No. 1 bestselling author of Shatter the Bones and Dark Blood Detective Constable Ash Henderson has a dark secret! Five years ago his daughter, Rebecca, went missing on the eve of her thirteenth birthday. A year later the first card arrived: homemade, with a Polaroid picture stuck to the front -- Rebecca, strapped to a chair, gagged and terrified. Every year another card: each one worse than the last. The tabloids call him The Birthday Boy. He's been snatching girls for twelve years, always in the run-up to their thirteenth birthday, sending the families his homemade cards showing their daughters being slowly tortured to death. But Ash hasn't told anyone about Rebecca's birthday cards -- they all think she's just run away from home -- because if anyone finds out, he'll be taken off the investigation. And he's sacrificed too much to give up before his daughter's killer gets what he deserves!

I have to say Stuart Macbride is a genius with his writing. This is one of the best crime novels I have read! Stuart is such a gritty writer, there were times I wanted to put this book down because I was a tad disturbed but found myself so enthralled with his writing. I also really love the setting of this book (I really enjoy books that take place in other countries, especially the UK) it's fun getting around a new area and getting used to the accents of the characters.

The opening chapter is gruesome and really captures the reader's attention (and he keeps your attention throughout!) While reading I found myself saying, "Okay I think I know who it is", and then I turn the page and come to find out something new and I love that. His characters are so much fun to read, my favourite has to be Dr McDonald because she has such a quriky personality and I found myself always laughing when she was in a scene (no matter what was going on). I found myself picturing a  younger version of Temperance Brennan from the TV show (not the books).

One part of the book makes me have a love/hate relationship with this story and that is the ending! I can't go into detail or else it will spoil it but it was definitely amazing. I absolutely loved it because it does something different from other crime novels, it was so unexpected and usually I find that most always end on the same kind of note. Stuart Macbride definitely takes his story in a different way.

I got to meet Stuart at a wonderful event over at Harper Collins in October and he was so much fun. It's hard to imagine that someone so funny can write such dark things. He was so much fun to listen to (he is definitely a talker!) and he even signed all the books and tried to personalize them (he drew a cat in mine). We even had fun attempting to do a plot map (though we didn't get to far). If you haven't read any Staurt Macbride I suggest you start with his creepy but funny short story "The Princess and the Pervert" (it's hilarious to hear him read it).

I feel like I need to go out and buy up all his other books to see if they are just as good as this standalone novel.

Similar titles:
The Silence of the Lambs by Thomas Harris
Darkly Dreaming Dexter by Jeff Lindsay
The Hypnotist by Lars Kepler
Posted by Andrea @ Cozy Up at 10:00 AM