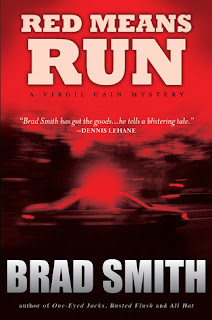 Mickey Dupree is one of the most successful criminal attorneys in upstate , having never lost a capital murder case. That is the upside of being Mickey. The downside—Mickey has a lot of enemies and one of them drives the shaft of a golf club through his heart, leaving him dead in a sand trap at his exclusive country club.

The cops, led by a dimwitted detective named Joe Brady, focus their attentions on Virgil Cain. Just two weeks earlier Virgil told a crowded bar that "somebody ought to blow Mickey's head off," after the slippery lawyer earned an acquittal for Alan Comstock, the man accused of murdering Virgil's wife. Comstock, a legendary record producer, gun nut, and certifiable lunatic, has returned to his estate, where he lives with his wife, the long-suffering Jane.

It appears to Virgil that the fix is in when Brady immediately throws him into jail with no questions asked. In order to set things right, Virgil escapes from jail, determined to find Mickey's killer himself. Aside from a smart and sexy detective named Claire Marchand, everybody is convinced that Virgil is the culprit. When Alan Comstock is discovered with six slugs in his body the day after Virgil's escape, his guilt is almost assured. Now it is up to Virgil to convince everyone of his innocence—by finding the killer before he winds up being the next victim.

My Review: *BE ADVISED POSSIBLE SPOILERS*

I found this to be an interesting crime/mystery book by a Canadian (something I have not read before to be honest). I really enjoyed the characters that we get to meet throughout the story, especially Virgil Cain himself. He is a sarcastic guy and brings a touch of humour to the book. I enjoyed the idea of Virgil trying to find the killer when everyone already believes for him to be the killer, it always makes for an interesting story.

The problem I found with this book, though, was that there was more focus on Virgil escaping police custody and him just trying to keep everyone off his track. The focus of the story is everyone trying to find him rather than anyone trying to find reason that he may not be the killer. It took too long to get around to anyone looking for clues for a different killer (including Virgil himself).

Another issue I had was that the main cop leading the investigation (Joe Brady) jumps the gun for a cop right at the beginning in arresting Virgil. I just thought there would be a little more search into another suspect but that doesn't come until closer to the very end of the book.

With that being said I enjoyed a lot of things about this book. The mystery of it was written well and Brad Smith does a good job of having you guessing throughout the entire story. I did enjoy the secondary character of Mary, who is a moral character and yet she is so adorable. At the beginning I found there were a lot of characters and different stories to follow, but I did understand they would all come together eventually (which they do at the end). And when they do come together it was actually a nice surprise.