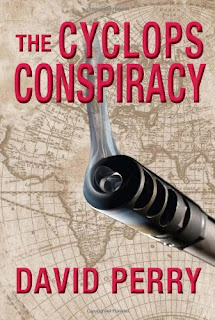 
In this engaging thriller, David Perry demonstrates his skill as a master storyteller taking us behind the counter into the world of pharmacy. The Cyclops Conspiracy accelerates through tense terrain toward an incredible finish. As the story opens, pharmacist Jason Rodgers stands nose to nose with his tortured past following the untimely death of his mentor, Thomas Pettigrew. He is reunited with his former lover and Pettigrew's daughter Christine. Troubled by the way Pettigrew died and Christine's unsettling statements about her father, Rodgers pushes to know more. Their reunion initiates a cascade of apparently unrelated but fateful turn of events for Rodgers-an incredible job offer working for a mysterious millionaire, the lustful pursuits of a sexy physician, and the criminal activities of a corrupt pharmacist. With the clock ticking down to a nail-biting climax, he races to stop a plot and expose the conspirators before he becomes their next victim-and before American history is irrevocably altered.

I really enjoy mystery and thrillers and this one sounded like a really interesting read being based around conspiracies. This story began in an interesting way for a thriller, right at the beginning you are told who is behind the conspiracy (so to say). At first I thought this was a little weird because I'm used to trying to guess who is behind the events happening. I found it was almost like working backwards through a story, you know who the culprit is but then you are trying to figure out why they are doing this.

There were a few things about the story that disappointed me a little. The first thing was that I found a lot of the story seemed to focus on the drama between Christine and Jason. It felt that the mystery of the conspiracy was a bit overshadowed by the history between these two and the 'will they won't they get back together' plot.

I also found the story to be a little long for everything that was included. I found that it took a little long to get into a lot of the action and I was running out of steam when it came to that part, I slowed down a little bit half way through the story. It did pick up at the end when all the action really started which I enjoyed. The action was keep you on the edge of your seat thrilling, but it just took a little longer to get there than I would have liked. I found there were parts that didn't absolutely need to be included, the search for the answers took too long and there was a lot happening that wasn't necessary (there is some things with Jason's ex-girlfriend that seemed to be just put in there for no reason).

This was an enjoyable read and if you like thrillers with a little conspiracy mixed in you will enjoy The Cyclops Conspiracy.

Other books you may enjoy:
The Girl With the Dragon Tattoo by Steig Larsson
The Litigators by John Grisham
The Bourne Identity by Robert Ludlum
Posted by Andrea @ Cozy Up at 11:00 AM