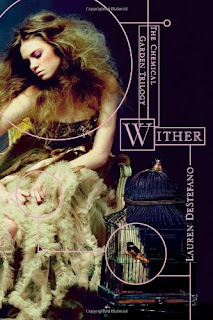 What if you knew exactly when you would die?

When sixteen-year-old Rhine Ellery is taken by the Gatherers to become a bride, she enters a world of wealth and privilege. Despite her husband Linden's genuine love for her, and a tenuous trust among her sister wives, Rhine has one purpose: to escape—to find her twin brother and go home.

But Rhine has more to contend with than losing her freedom. Linden's eccentric father is bent on finding an antidote to the genetic virus that is getting closer to taking his son, even if it means collecting corpses in order to test his experiments. With the help of Gabriel, a servant she trusts, Rhine attempts to break free, in the limted time she has left.

This book was really interesting, and definitely very enjoyable. What would you do if you knew how long you had left to live, I would try and live my life to the fullest. The world that Lauren DeStefano creates in Wither is intriguing.

There were a lot of questions that I had after reading Wither, like where did this disease come from (it's never really explained). And I really found it hard to believe that there were people who believed in letting the disease take it's course and against finding a cure (if I was in this position I would do whatever I could to have more time). These questions did not take away from the story though, because I know this is a trilogy I am hoping that some of these questions will be answered in subsequent books.

The other problem I had with the book was that I believe Linden is a little to naive for someone who has actually been out to the real world. The fact that he believes everything his father tells him makes him seem more of a child than he really is. Though I still loved him and thought he was adorable despite being too childish. And Lauren writes a great evil character (though I don't necessarily want to call him evil). Linden's father is the perfect creepy for this story and I really got the chills whenever he was described in a scene.

I really enjoyed that this book was about the characters and not a lot of action happening (usually I enjoy the action, but I enjoyed getting to know the characters). Rhine is a very strong character and I enjoy that she is the one that truly takes care of her "sister wives". She is very emotional but that's what makes her stronger in my opinion.

I could not believe the ending, and I am so excited to read Fever to see what happens next!