Review: The Knife of Never Letting Go by Patrick Ness 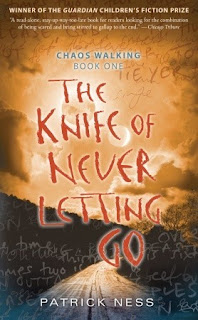 Todd Hewitt is the only boy in a town of men. Ever since the settlers were infected with the Noise germ, Todd can hear everything the men think, and they hear everything he thinks. Todd is just a month away from becoming a man, but in the midst of the cacophony, he knows that the town is hiding something from him -- something so awful Todd is forced to flee with only his dog, whose simple, loyal voice he hears too. With hostile men from the town in pursuit, the two stumble upon a strange and eerily silent creature: a girl. Who is she? Why wasn't she killed by the germ like all the females on ? Propelled by Todd's gritty narration, readers are in for a white-knuckle journey in which a boy on the cusp of manhood must unlearn everything he knows in order to figure out who he truly is.

I decided to look into this book because it was a Goodreads recommendation, and I am so glad I did. I can now officially vouch that the recommendations they give are great! I absolutely loved this book! Patrick Ness's writing is amazing! The whole story is told from Todd's perspective, at times I felt that Todd was actually writing the story himself because the way Patrick writes shows that Todd is not able to read (a lot of the words are written in phonetics rather than proper spelling). As a reader you learn things along with Todd which is fun, because there is a lot of mystery to the story that keeps the story going.

The world building in this story is well done, a world where it is impossible to keep secrets is such an interesting concept. We begin by only knowing about one settlement, but soon learn there are many different places and each place has their own way of dealing with the 'Noise'. It's interesting to go on the adventure with Todd and learn about these people.

There is also a lot of mystery to the story that you can never really figure out. As Todd and Viola travel through each of the settlements you find out that nobody likes people from Prentisstown. Throughout the book you never find out why they are hated until you get to the very end. I found myself continually reading trying to figure out what happened.

This book also had a large amount of action throughout. I found myself enthralled at what would happen next. Right from the beginning Todd gets into a fight with another one of the characters and throughout the entire novel Todd constantly finds himself getting into intense fights with people. They are always edge of your seat fights and it makes the book so much fun. I found that they always came up at unexpected moments, but you do get a little breather between the action before Patrick jumps back into it (and he really does just jump right into the action scenes).

Patrick Ness also did a great job with the relationship between Viola and Todd, he has it slowly evolve throughout the book. With all the books I'm used to reading about this instant love between two characters this was a nice change to see not even a relationship in that way, it just evolves into a close friendship with them helping one another.

This was definitely a surprising read for me and I can't wait to see what happens next. Will definitely be finishing this series!

Similar titles:
Divergent by Veronica Roth
The Replacement by Brenna Yovanoff
Posted by Andrea @ Cozy Up at 10:30 AM