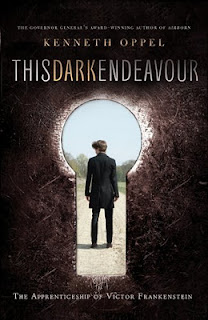 Victor and Konrad are the twin brothers Frankenstein. They are nearly inseparable. Growing up, their lives are filled with imaginary adventures...until the day their adventures turn all too real.

They stumble upon The Dark Library, and secret books of alchemy and ancient remedies are discovered. Father forbids that they ever enter the room again, but this only peaks Victor's curiosity more. When Konrad falls gravely ill, Victor is not be satisfied with the various doctors his parents have called in to help. He is drawn back to The Dark Library where he uncovers an ancient formula for the Elixir of Life. Elizabeth, Henry, and Victor immediately set out to find assistance in a man who was once known for his alchemical works to help create the formula.

Determination and the unthinkable outcome of losing his brother spur Victor on in the quest for the three ingredients that will save Konrads life. After scaling the highest trees in the Strumwald, diving into the deepest lake caves, and sacrificing one’s own body part, the three fearless friends risk their lives to save another.

Can I just start by saying OH MY!!! This book was impossible to put down. I am so glad that Cory over at Harper Collins suggest I pick it up. Everything about this book was absolutely amazing. I really love the thought put into this, the idea of a prequel to Frankenstein and Kenneth Oppel does a great job introducing readers to Victor and the idea of how he becomes immersed in the sciences. I love how they show how interested Victor is in finding out the secret to the elixir and showing that he is a great scientist.

I also really enjoyed how Kenneth shows the relationship of Victor and Konrad. He really touches on a lot of things that many sets of twins feel, which made the story seem much more real. He touches on how one brother is better than another at almost everything yet they still respect each other. I loved the relationship of all the characters with one another. The main female character, Elizabeth, is written a strong character who knows how to handle herself (I love books with strong female characters rather than one who takes a back seat to the action).

Kenneth Oppel fills this story with so much action that I felt myself jumping up at times and was on the edge of my seat throughout a lot of it. I couldn't stop reading and wanted the adventures to keep coming. Kenneth also does a great job of throwing some loops at the reader. Just when I thought I had everything figured out and could guess what was coming, something else comes along and I was just like WHAT?!

The ending... wow, I so was getting ready to throw this book against a wall when I came to the last chapter. I really can't see where Kenneth will take this series in the next book!

Other books by Kenneth Oppel: