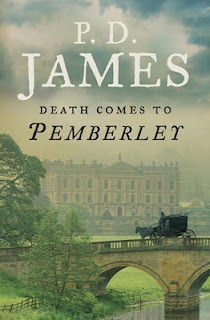 The year is 1803, and Darcy and Elizabeth have been married for six years. There are now two handsome and healthy sons in the nursery, 's beloved sister Jane and her husband Bingley live nearby and the orderly world of Pemberley seems unassailable. But all this is threatened when, on the eve of the annual autumn ball, the guests are preparing to retire for the night when a chaise appears, rocking down the path from Pemberley's wild woodland. As it pulls up, Lydia Wickham – 's younger, unreliable sister – stumbles out screaming that her husband has been murdered. Inspired by a lifelong passion for the work of Jane Austen, PD James masterfully recreates the world of Pride and Prejudice, and combines it with the excitement and suspense of a brilliantly-crafted crime story. Death Comes to Pemberley is a distinguished work of fiction, from one of the best-loved, most- read writers of our time.

I've never read PD James before but when I heard about the premises of this story I was really intrigued. I love all of Jane Austen's works and making a guess as to what happened after Pride and Prejudice was a great idea. Add a little mystery to the works and I was hooked. But when I read it I was a little disappointed with the story. I enjoyed it for the story but wouldn't classify it as an amazing mystery novel.

I was really glad to start out the novel and get a background to what happened in Pride and Prejudice (I thought I was going to have to read it again, or at least Coles Notes, to remember everything that happened). I also enjoyed that PD James really kept up with the Jane Austen's voice throughout the novel, and kept the characters the same.

The thing that really disappointed me was the promise of mystery and intrigue. I found that this story didn't focus a lot on the mystery (in my opinion). I found that PD James focused a lot more on the characters and how they felt about everything going on, rather than making the story very mysterious. I was hoping for something more to keep me gripped to the pages always wondering what would happen next. She did add in some surprising details at the end that I wasn't expecting, which I always enjoy.

PD James has a great writing style and I applaud her for taking on the task of writing about some of the greatest characters (my opinion) in classical history. I think it was a difficult endeavour to give us more insight into Elizabeth and Darcy, and the rest of the cast, but she did well in answering some questions that Jane Austen left at the end. There are definitely some other characters in Jane Austen's other works that I would enjoy seeing PD James take on (Emma anyone?) I would like to go back to some of her other books to see what else she has done in mystery.

My Rating: 3 comfy couches out of 5

Other Books by PD James