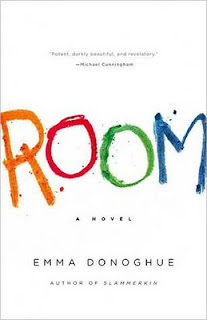 Pages: 321
Received: Borrowed from a friend

To five-year-old-Jack, Room is the world. . . . It's where he was born, it's where he and his Ma eat and sleep and play and learn. At night, his Ma shuts him safely in the wardrobe, where he is meant to be asleep when Old Nick visits.

Room is home to Jack, but to Ma it's the prison where she has been held for seven years. Through her fierce love for her son, she has created a life for him in this eleven-by-eleven-foot space. But with Jack's curiosity building alongside her own desperation, she knows that Room cannot contain either much longer.

Room is a tale at once shocking, riveting, exhilarating--a story of unconquerable love in harrowing circumstances, and of the diamond-hard bond between a mother and her child.

I have to start out by saying that it has been a long time since I've been this emotional when reading a book. I found myself crying almost the entire time. I think that the last one was The Lovely Bones. This book will definitely be added to be re-read pile just because it is that amazing in my opinion. Emma Dononghue does a great job at writing from Jack's perspective.

Emma Donoghue gives readers hope and makes you feel for Jack, growing up only knowing about Room. I really enjoyed the innocence of Jack throughout the novel, not understanding anything beyond the four walls he has come to know as his home. She really lets the reader into Jack's mind and I really enjoyed how Emma shows Jack making friends with everything in the room because he doesn't know anything else... he believes that there is nothing outside of Room and believes that everything on TV is make believe.

Even though the entire book is written in Jack's voice, the reader still gets to understand Ma, how she will do anything to protect him. Emma describes in great detail the surroundings and the feelings of the characters.

I knew coming into this book that would be an intense read just from the description, but Emma was able to add in some humour to all the darkness surrounding the characters. This is a great story to show that people push through because of someone else, everything that Jack's Ma does throughout the novel is to protect him, and you understand that early on. As a writer Emma does a great job at pulling at the readers heartstrings and really getting the emotional feeling of what the characters are going through!

Other books by Emma Donoghue: