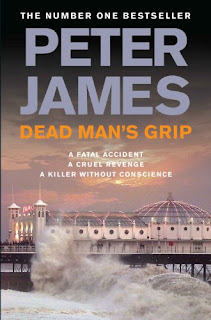 #7 in the Roy Grace series

Here the detective is involved in dark developments after a young woman is traumatised in a fatal traffic accident. The accident has resulted in the death of student – but then the drivers of other vehicles involved are discovered tortured and killed.

The fact that Peter James has built up considerable storytelling skills over the years is hardly an accident; had he not written a single Roy Grace novel, he would, of course, be remembered for a series of highly professional supernatural outings (recently reissued with covers that rather cheekily suggested the books are like his more recent work). But his most signal achievement is to keep us comprehensively engaged in the increasingly overfamiliar field of the police procedural. Not an easy task, but one that James pulls off with aplomb.

I haven't read anything by Peter James before this, and I like that even though this is a series you don't need to read the previous ones (though I would have liked to). This book was amazing. Very intense things happening. I am a big fan of crime novels and this one did not disappoint me at all. I was gripped from the beginning.

What I really enjoyed about this is it's been awhile since I've seen a good crime novel including mafia connections and this one was well done. Though Peter James usually deals with the England scene, he decided to cross over and go to New York with this one and it really worked well.

I found even though I could predict some things coming along, Peter James still threw me quite a few loops during the story and I just couldn't put it down. I am definitely putting Peter James on my list of authors that I will keep an eye out for new books (and go through his backlist as well).

I was very lucky to get to meet Peter James a few months ago and learning how he researches his stories makes me see them in a different light, and enjoy them that much more. He is very absorbed in his work and rides along with the Brighton Police often, so he really gets to know and understand how the police work.

There was a great teaser trailer video for this book which can be seen here:


Rating: 5 out of 5 comfy couches
Other books by Peter James