Review: The First Rule of Ten by Gay Hendricks/Tinker Lindsay 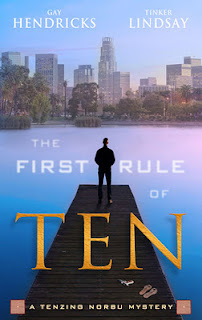 "Don't ignore intuitive tickles lest they reappear as sledgehammers." That's the first rule of Ten.

Tenzing Norbu (Ten for short) - ex-monk and soon-to-be ex-cop - is a protagonist unique to our times. In The First Rule of Ten, the first installment in a three-book detective series, we meet this spiritual warrior who is singularly equipped, if not occasionally ill-equipped, as he takes on his first case as a private investigator in Los Angeles.

Growing up in a Tibetan Monastery, Ten dreamed of becoming a modern-day Sherlock Holmes. So when he was sent to Los Angeles to teach meditation, he joined the LAPD instead. But as the Buddha says, change is inevitable; and ten years later, everything is about to change - big-time - for Ten. One resignation from the police force, two bullet-wounds, three suspicious deaths, and a beautiful woman later, he quickly learns that whenever he breaks his first rule, mayhem follows.

I wasn't sure what to expect when I started reading this novel, and I was quite pleasantly surprised. The description of a mystery novel with the protagonist being a monk made me a little weary but I actually found this book entertaining. I won't say it was amazing but it was definitely a good read.

"Ten" grew up as a monk in a monastery and from there went on to be a cop (really how do those two things come together?). He was always a troublemaker and loved reading Sherlock Holmes (there's the connection!). I loved the different mentions of Sherlock Holmes throughout the novel (he really looked to Holmes when thinking of what to do next). The mystery plot was really intriguing for me as well.

I loved the conspiracy aspect between so many differing groups, I was not expecting a lot of what was thrown at me. I really enjoy when mystery books like this one don't make it glaringly obvious as to who is involved, and this one had great twists to it.

The character of Tenzing also had a great sense of humour to him which I enjoy in characters because it gives the story a bit of comic relief instead of being all seriousness. Some of the humour kind of reminded me of the TV show Bones (not understanding a lot of common things because he grew up as a monk). I would recommend this one to mystery lovers all around.

Rating: 4 out of 5 comfy couches