Review: The River of No Return by Bee Ridgway 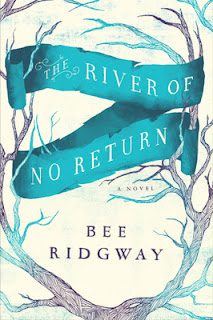 In Bee Ridgway’s wonderfully imaginative debut novel, a man and a woman travel through time in a quest to bring down a secret society that controls the past and, thus, the future.

“You are now a member of the Guild. There is no return.” Two hundred years after he was about to die on a Napoleonic battlefield, Nick Falcott, soldier and aristocrat, wakes up in a hospital bed in modern London. The Guild, an entity that controls time travel, showers him with life's advantages. But Nick yearns for home and for one brown-eyed girl, lost now down the centuries. Then the Guild asks him to break its own rule. It needs Nick to go back to 1815 to fight the Guild’s enemies and to find something called the Talisman.

In 1815, Julia Percy mourns the death of her beloved grandfather, an earl who could play with time. On his deathbed he whispers in her ear: “Pretend!” Pretend what? When Nick returns home as if from the dead, older than he should be and battle scarred, Julia begins to suspect that her very life depends upon the secrets Grandfather never told her. Soon enough Julia and Nick are caught up in an adventure that stretches up and down the river of time. As their knowledge of the Guild and their feelings for each other grow, the fate of the future itself is hanging in the balance.

The cover of this book was the first thing that really grabbed my attention. I absolutely love the colour scheme and how the title is placed. Then I read more about it and learned it was about time travel, well I had to have this book at that point (as you may be able to tell I am a sucker for time travel books). I was intrigued by this idea of travelling to the future and there being something of a Talisman that is causing some mysterious things to happen.

As much as I enjoyed this story, I felt like there were quite a few times where things dragged on for some time. This book is filled with information about how people are able to travel through time. I felt like I was on information overload at times, but I think it was a great introduction to everything that happens and will happen in the future.

I really loved the romance in this story, but I felt like this was not the focus of the book. I really liked that there was so much more to the story than a romance plot, not that I don't like romance in my books because I love it! I was so interested in "The Guild" and "The Ofan" though, always wondering what is causing the war between them. I definitely hope (and I'm almost certain) that there is a sequel coming soon, because I have so many questions about what will happen. What really got my attention with this book was how everything took place during a major historical event, I love when things like that happen (it's what drew me to A DISCOVERY OF WITCHES). So there is an added bonus to this book!

I loved all the characters as well, both the main and secondary characters really added to this story. Nick and Julia slowly learning about what they can do and how it affects so many people. But the characters I really loved were Nick's sisters. They learned to be strong after Nick was believed to be dead and learned to take control of the household. But they also have this attitude and something about the way they hold themselves just always made me want a few more scenes with them.

Honestly, this book was a lot of fun, and Ridgway added in a great amount of detail to make everything realistic. Readers will fall in love with the strength of the characters but the plot will also keep you coming back to this book. This book is definitely loaded with information, introducing readers to the world of time travel, but it is definitely set up for more action in the future.