Review: The Loop by Shandy Lawson 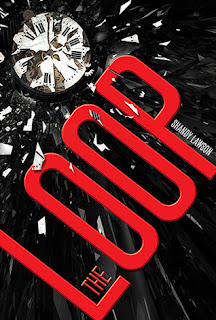 Ben and Maggie have met, fallen in love, and died together countless times. Over the course of two pivotal days—both the best and worst of their lives—they struggle again and again to resist the pull of fate and the force of time itself. With each failure, they return to the beginning of their end, a wild road trip that brings them to the scene of their own murders and into the hands of the man destined to kill them.

As time circles back on itself, events become more deeply ingrained, more inescapable for the two kids trapped inside the loop. The closer they come to breaking out, the tighter fate’s clutches seem to grip them. They devise a desperate plan to break free and survive the days ahead, but what if Ben and Maggie’s only shot at not dying is surviving apart?

Back to time travel books with this one, my one true love... sadly this book was nothing like I thought it was going to be and in the end left me a bit disappointed and extremely confused. The idea behind the book is that the characters of Ben and Maggie are stuck in a time loop and relive the same day over and over, where at the end of the day they die. Throughout the whole book we are told over and over how neither of the characters can change "fate" and that they can change small things throughout the loop but they will never change the big things.

What really disappointed me about this book were all the questions that went unanswered. There is no explanation as to why these loops happen and why it is only specific people they happen to. There needs to be a reason why something like this would happen. There is one point in the book where Maggie explains that she has been through a loop four other times, but how did she get out of those to get to where she is now? And why has this loop happened so many times before? Why can't they get out of this one, is it because they die at the end?

This book is very plot driven, I found that the characters didn't grow or change through the course of this book. I had issues with Ben because he seemed to just accept everything he was told. With a plot like this I find that if someone told me that time just kept replaying I would have some questions rather than just saying okay I guess I will keep doing the same thing because I'm told I can't change it. I really wanted more from the characters, just to understand why they would do something rather than just being told it's because they have to stick to what will happen.

The story is told from Ben's perspective as he learns that he can change things and he tries to figure out how to save him and Maggie. But then three quarters of the way through, the story changes to Maggie's perspective and this really threw me, I was lost for a few pages before realizing what happened. It was interesting to see things from her mind set because there were sections where they left each other, so you get to see what happened to her.

The idea of characters being stuck in a loop was really interesting, and this book does have a lot of potential. I was intrigued at the idea of changing fate, remembering something that happened and tweaking your future just a little more could have a large outcome. This book was a really quick read and I think that is why a lot of information is glossed over. I got through this book in a few hours and there was a lot that kept me interested but there were just too many confusing things.