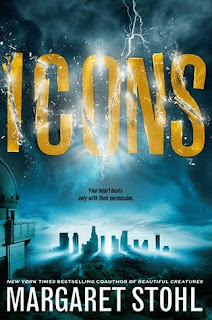 Your heart beats only with their permission.

Everything changed on The Day. The day the windows shattered. The day the power stopped. The day Dol's family dropped dead. The day Earth lost a war it didn't know it was fighting.

Since then, Dol has lived a simple life in the countryside -- safe from the shadow of the Icon and its terrifying power. Hiding from the one truth she can't avoid.

She's different. She survived. Why?

When Dol and her best friend, Ro, are captured and taken to the Embassy, off the coast of the sprawling metropolis once known as the City of Angels, they find only more questions. While Ro and fellow hostage Tima rage against their captors, Dol finds herself drawn to Lucas, the Ambassador's privileged son. But the four teens are more alike than they might think, and the timing of their meeting isn't a coincidence. It's a conspiracy.

Bestselling author Margaret Stohl delivers the first book in a heart-pounding series set in a haunting new world where four teens must piece together the mysteries of their pasts -- in order to save the future.

This book has been on my to-read list ever since I heard about it last year, I have really wanted to see what Margaret Stohl's writing on her own would be like. I also thought "Earth lost a war it didn't know it was fighting..." My first thought was ALIENS, I need a good alien book. And in a way this is an alien book, but that is not the focus of it at all. This review is difficult because the book was not what I was expecting and I'm still not completely sure how I feel about everything together.

I will admit when I started reading this book I wasn't absolutely sure where Stohl was taking the story, she takes her time to introduce everything to the readers. Slowly letting us get to know the characters and what exactly "The Day" was. For me I felt like it was taking awhile to get into the story, but there were sections that intrigued me and convinced me to keep reading, in between each of the chapters are documents about different things that lead up to a big reveal at the end of the book (which in the end, was not really as shocking as I would have thought).

This book is all about these four teenagers (but the main character is Dol) and what really brings them all together at this time. I found it took a lot of time to get the answers, but there were a lot of moments in this book that still got my heart pounding wondering what would happen next.

The characters were for the most part interesting, and I wanted to know more about their uncontrollable emotions. I will admit though that I got annoyed at the characters often throughout the book, Dol was someone who could not make up her mind for the life of her, she kept going back and forth on what she believed and I just wanted her to make a decision! I find there are characters that I want fleshed out more in the rest of the series, Tima was one of my favourites and there is still a lot to learn about her I think.

The romance is also a very interesting one, because all the characters have this growing connection, they are all linked with one another and it's kind of like a square with everyone liking everyone (in a way). I could see how Dol and Lucas connected, and there is a back and forth unsure of who to trust. All in all though, the romance is very much in the background of this story.

I will say that even though this book was not what I was expecting I still enjoyed it, but I just wanted to know more about "The Day" itself and those that caused it. There was also not much of a mention of what the Icon's really are, but I think this book is an interesting start to the series, Stohl has me intrigued with her characters she created, and how they all connected with one another.
Posted by Andrea @ Cozy Up at 6:00 AM