Review: The Aftermath by Rhidian Brook 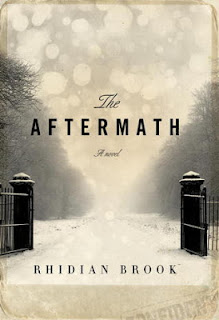 Goodreads Synopsis:
, 1946. Thousands remain displaced in what is now the British Occupied Zone. Charged with overseeing the rebuilding of this devastated city and the de-Nazification of its defeated people, Colonel Lewis Morgan is requisitioned a fine house on the banks of the Elbe, where he will be joined by his grieving wife, Rachael, and only remaining son, Edmund.

But rather than force its owners, a German widower and his traumatized daughter, to leave their home, Lewis insists that the two families live together. In this charged and claustrophobic atmosphere all must confront their true selves as enmity and grief give way to passion and betrayal.

The Aftermath is a stunning novel about our fiercest loyalties, our deepest desires and the transformative power of forgiveness.

I've been really enjoying books that take place around war lately, I think it has something to do with the way authors show the humanity in people and what some individuals would do to save themselves. THE AFTERMATH is a story about what comes after the war. This is specifically about a man who is overseeing the de-Nazification of Germans and how the war changes him and his family.

This book was emotional and beautiful, the way Brook describes what the war has done to each of the different characters and how they are trying to survive this new place they are in. Brook's storytelling was absolutely amazing, and I was engrossed in this story of love, loss and learning to forgive and move on. I felt like so much happened in such a short amount of time.

For me, I found Colonel Morgan to be the hero of the book, he has this huge heart and wants to keep everybody safe. As Germans are being forced out of their homes and the English move in, Lewis decides that the house he has been assigned to is big enough that the owner should be able to stay there, and what follows is a story of learning who you really are and how these people deal with this new situation. Colonel Morgan sees the best in people and he does what he can to get others to see it too.

I love how Lewis tries to instil this view into his family. As his wife and son are coming across, they are being taught to avoid the Germans at all costs because they are evil, but Lewis thinks that they need to get to know these people and interact with them. Rachael tries hard to stay away and create boundaries, but quickly a bond is created through a shared emotion.

In THE AFTERMATH, Rhidian Brook shows that despite all this evil in the world, there is always good and someone willing to help. I loved how each of the characters learned about themselves and how they reacted to the situations around them. The story that Brook has written has stuck in the back of my mind and I keep thinking about everything that happened, for me I know this is an amazing book because it has the power to keep my mind on it after I've read it.

If you're a fan of historical fiction books than I definitely suggest picking up this one. It's beautiful seeing how someone can pick themselves up after much of the horror they have seen. This story is an inspiration.
Posted by Andrea @ Cozy Up at 6:00 AM