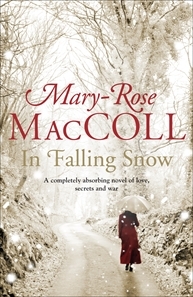 Received: Received a copy through the Book Depository affiliate program

A vivid and compelling story of love, war and secrets, set against the backdrop of WWI France. 'In the beginning, it was the summers I remembered - long warm days under the palest blue skies, the cornflowers and forget-me-nots lining the road through the Lys forest, the buzz of insects going about their work, Violet telling me lies.' Iris is getting old. A widow, her days are spent living quietly and worrying about her granddaughter, Grace, a headstrong young doctor. It's a small sort of life. But one day an invitation comes for Iris through the post to a reunion in France, where she served in a hospital during WWI. Determined to go, Iris is overcome by the memories of the past, when as a shy, naive young woman she followed her fifteen-year-old brother, Tom, to France in 1914 intending to bring him home. On her way to find Tom, Iris comes across the charismatic Miss Ivens, who is setting up a field hospital in the old abbey of Royaumont, north of Paris. Putting her fears aside, Iris decides to stay at Royaumont, and it is there that she truly comes of age, finding her capability and her strength, discovering her passion for medicine, making friends with the vivacious Violet and falling in love. But war is a brutal thing, and when the ultimate tragedy happens, there is a terrible price that Iris has to pay, a price that will echo down the generations. A moving and uplifting novel about the small, unsung acts of heroism of which love makes us capable.

This book really stuck out to me because it was more than just a romance during the war. This book is about family and how secrets from the past can come back generations later to make an impact on their lives. This is also about friendships and family throughout and how those stick with someone years after. I was really intrigued in how Grace's past during WWI could affect her granddaughter's future. This story is told in alternating perspectives between Iris and Grace.

I found that I did enjoy Iris' perspective more, but I was confused often. Iris is an older woman and is very confused about where she is and who is around her. Her perspective jumps back and forth from the present to her past at Royaumont (which is the part that kept me interested in the story). I really loved the slow build up to what happened at Royaumont and what brought Iris to where she is now.

I loved the sense of family that is portrayed in this book. Iris has gone to Paris to bring her little brother home and convince him to change his mind about joining the war. Throughout her time at Royaumount, Iris is continually thinking about her brother, she sees herself as his protector. Iris also has this strong relationship with Violet bringing out her strengths. I love a friendship with two people that are so opposite from each other, you really see another side of the character.

Grace's perspective was not as in depth as Iris' but you do see her strength. Grace has her own issues to deal with in family and her career. Grace is a surgeon in obstetrics but she is fighting to prove her worth because she is a woman, Grace works long hours and must deal with three children while her husband is also a doctor. As much as I wasn't as interested in Grace's story it did add to show how Iris was as a person. Since Grace's mother passed away, Iris took her in and raised her as her own, even though she was older at that point.

All in all this is a story that is all about Iris and her personality. But I did enjoy the little bit of mystery behind Grace's family and what happened to her mother and father. I was actually surprised at how the book ended, and what everything came to about the past. This book really shows how secrets can affect children and even following generations. This book was a beautiful story, even though it felt a little disjointed at times.