Review: Any Other Name by Emma Newman 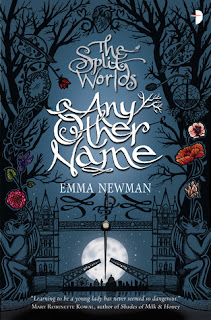 Release Date: May 28, 2013
Buy From Amazon.ca / Buy From Chapters.ca /
Buy From BookDepository.com

Cat has been forced into an arranged marriage with William - a situation that comes with far more strings than even she could have anticipated, especially when she learns of his family's intentions for them both.

Meanwhile, Max and the gargoyle investigate The Agency - a mysterious organisation that appears to play by its own rules - and none of them favourable to Society.

Over in Mundanus, Sam has discovered something very peculiar about his wife's employer - something that could herald a change for everyone in both sides of the Split Worlds.

I had a lot of fun with the first book in The Split Worlds series, BETWEEN TWO THORNS, and I was excited to see what was next for the characters. ANY OTHER NAME was just as fun, though I was hoping for a little more world building, I am still a little confused by how these different worlds all exist together. This book begins right where we left off in BETWEEN TWO THORNS, I love when a book continues at the same time and we are not missing pieces.

Cat has now been forced into her marriage with William, and yet every step of the way she still fights for what she believes in. I love that Cat's attitude comes back full force in this book, she was a character that I really admired in the first book and still really love in this story as well. But also in a way, Cat's priorities change in this book and she realizes that instead of trying to run away, things in their world need to be changed and she is in the perfect position to do it. With everything though, I think there should have been a little more focus on Cat and instead we got a lot more of William and other characters.

I still found that there were a few too many stories to follow along with in this book. As interesting as all the stories were, I felt that at times I was missing out on other character's because there is a lot going on. There is an added mystery of Sam's wife in this book that I think helped take away from the bigger picture.

I also found that this book more focused on William's rise to power and not much really happened for the characters until the end of the story. The story dragged at parts and I could tell that as things began happening I was closer to the end. The first book had a lot of action and intrigue, and I felt that this book didn't hold up as well to the first book, though there was still some intrigue. As a reader you get to see more than the characters, and there were parts where I felt that some of the characters were too trusting of others.

The best part of this book for me was actually watching Cat and William's relationship grow more now that they were married. Despite being forced into the marriage, I felt that Cat understood what she needed to do and you could see her beginning to trust more rather than just hide away from everyone around her. Of all the characters in this series, Cat is by far the best one. She changes and learns more about herself and the world she lives in over the course of these books and that is something that I enjoy reading about, Characters need to have a change to make the story work.

Emma Newman has definitely written a fun and interesting series, I think I just had a few middle book issues with this one. I am excited to finish the series after the ending of this book though!