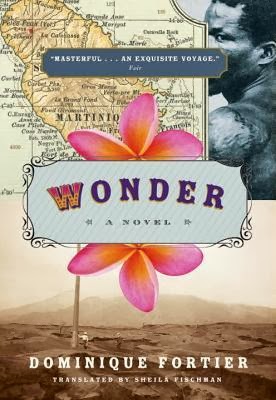 An enthralling shell-game of a novel, in which past and present speak to each other to create a brilliant whole from three distinct parts, and merits comparison to the likes of David Mitchell's Cloud Atlas and Peter Carey's Oscar and Lucinda.

On , the entire city of , - "the of the " - was destroyed when erupted. Except for one man: Baptiste Cyparis had been in a dungeon-like prison cell that morning. When he emerged, it was as if to the end of the world. Eventually, he would be known as The Man who Survived Doomsday, and become the first black man to star in Barnum & Bailey's circus. In those same years, on the other side of the , an English mathematician and his beloved, a musician, seek to explain the hidden rules that govern the movements of the earth, and discover "Love waves."

A century later in contemporary , two strangers come to know each other in a garden seeded with trees and crosses on the side of the mountain, witnessed only by a large dog and the pulsing city that surrounds them.

Her second novel richly displays Dominique Fortier's extraordinary literary skill, wit, and poetry, her ability to weave disparate threads into a golden tapestry that surprises, delights, and begs to be re-read the moment the final page is turned.

This book was really intriguing to me, I really loved the way it was written and how these three stories speak to each other. I went in not knowing what to expect from this book and I came out really thinking about everything that happened. I actually read through some of it, and then went back to re-read it because I really felt like I needed to let things sink in more. This is a story that really needs your attention, it's not something that you can just glance over while doing something else, and I love that it took all my attention, those are the best types of books.

The writing of this book captures the reader, it's beautiful and very emotional. I found myself becoming very invested in the stories, and I was sad to see each of them end, yet the story still continued on in the next story in a different way. Each of the characters are all affected by their surroundings in such strong ways. First there is Baptiste, the only man left alive after a volcano erupted. The story of his life after is absolutely amazing, watching as he deals with this heavy burden of being a lone survivor, being different from everyone and is put on display for a circus.

At the same time in a different place, you have these two people who are special and are interested in the hidden parts of the world. I especially loved their view on the world and how they saw things differently from everyone else around them. They take every little thing in and listen to the things around them, they are hyperaware of their surroundings and it helps them seek out answers to the world.

In all three of these stories the earth itself is a huge character, that as you read along you feel like you are learning more about. The relationships in all the stories are also a big part of each of the stories, my favourite by far is the last story, reading how these two strangers meet and learn about each other is amazing. Their interactions are so sweet and innocent.

This is a book that I believe the more times you read it the more you will find new and interesting things in the story. It is one that is meant to be re-read quite a few times, the writing is beautiful and will definitely draw your attention.
Posted by Andrea @ Cozy Up at 6:00 AM