Review: The Gods of Heavenly Punishment by Jennifer Cody Epstein 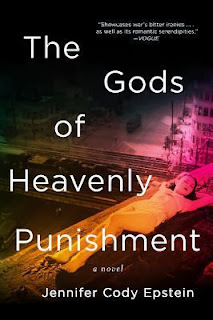 Received: Received a copy from Historical Fiction Blog Tours in exchange for an honest review

In this evocative and thrilling epic novel, fifteen-year-old Yoshi Kobayashi, child of Japan's New Empire, daughter of an ardent expansionist and a mother with a haunting past, is on her way home on a March night when American bombers shower her city with napalm--an attack that leaves one hundred thousand dead within hours and half the city in ashen ruins. In the days that follow, Yoshi's old life will blur beyond recognition, leading her to a new world marked by destruction and shaped by those considered the enemy: Cam, a downed bomber pilot taken prisoner by the Imperial Japanese Army; Anton, a gifted architect who helped modernize Tokyo's prewar skyline but is now charged with destroying it; and Billy, an Occupation soldier who arrives in the blackened city with a dark secret of his own. Directly or indirectly, each will shape Yoshi's journey as she seeks safety, love, and redemption.

I feel like lately I have been on a historical fiction kick, but a good one where the books are all different, I can say this book definitely fits into the different category. This novel spans many years and is told from many different perspectives as readers see how the war affected people all over, from both sides. But over the course of the novel we are shown how all these different people from all over the world can come together to affect one person over many years.

The story is very interesting but I found myself confused at times because of the way the book jumps around from character to character. I feel like the author tried to do too much in a short amount of pages, and at times the story was difficult to follow. I think the story could have been a little longer to give readers more time to get to know some more of the characters, with so many different people it is hard to really grasp their personalities, Yoshi is really the only one who you get to see the most of as she grows up.

I'm a little unsure of my final thoughts on this book because I felt like there was a lot of jumping around from one place to the next and one time to another. There are a lot of flashbacks to things happening to help you understand some of the characters but I felt like at times it wasn't always enough to really connect with all of them. I want to be able to connect with characters and I think this book had too many people to follow through with.

What I did really love about this book was all the connections that Jennifer Cody Epstein makes with her story. She uses this book to show how one little thing can affect so many people, and that the world is a small place where one person can be connected to another without even realizing it. In many ways this was an interesting story but it didn't catch my attention as much as I hoped it would, there was just a little something missing, but I did enjoy many parts of it.
Posted by Andrea @ Cozy Up at 6:00 AM