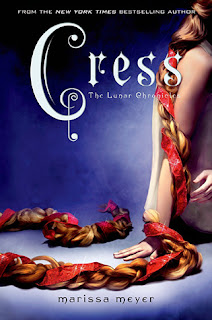 Received: Received an ecopy from Raincoast Books in exchange for an honest review

Rapunzel’s tower is a satellite. She can’t let down her hair—or her guard.

In this third book in the bestselling Lunar Chronicles series, Cinder and Captain Thorne are fugitives on the run, with Scarlet and Wolf in tow. Together, they’re plotting to overthrow Queen Levana and her army.

Their best hope lies with Cress, who has been trapped on a satellite since childhood with only her netscreens as company. All that screen time has made Cress an excellent hacker—unfortunately, she’s just received orders from Levana to track down Cinder and her handsome accomplice.

When a daring rescue goes awry, the group is separated. Cress finally has her freedom, but it comes at a high price. Meanwhile, Queen Levana will let nothing stop her marriage to Emperor Kai. Cress, Scarlet, and Cinder may not have signed up to save the world, but they may be the only ones who can.

A new year means a new book from Marissa Meyer, it's always so exciting to continue on with this series, and I am dreading the ending after spending so much amazing time in this world. Everything about this series just keeps getting better and more interesting. I don't know if my love for Marissa's writing can grow anymore and yet I find myself falling in love more and more with Cinder's story.

In this book we are introduced to Cress, a girl who has been trapped on a satellite and is an expert hacker. The only company she has is her computer. I really loved Cress, she was such an interesting character and she brings some new revelations to the story. Cress is such a great character, she is smart and she is so loveable, her interactions with the old characters is perfect and she fits in so well. I really enjoyed her storyline in comparison to the bigger picture of this series.

As we come closer to the wedding of Queen Levana and Emperor Kai, Cinder and her team are running out of time to help and they must put together a plan to stop, but they have become separated from one another. Everything starts coming together in this book and there is that much more action as we come closer to the big battle between good and evil.

The reviews for this series get harder and harder to write because I don't want to give away the story, and yet I just want to tell everyone to go out and read all of these books! The story gets more intriguing and the way this book ends leaves me needing WINTER. Honestly this is one of the greatest series I have read in awhile, and every one of these books belongs on a special shelf. Everyone must read these books!!!
Posted by Andrea @ Cozy Up at 6:00 AM