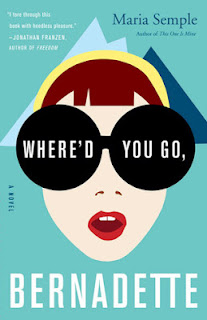 Bernadette Fox is notorious. To her Microsoft-guru husband, she's a fearlessly opinionated partner; to fellow private-school mothers in , she's a disgrace; to design mavens, she's a revolutionary architect, and to 15-year-old Bee, she is a best friend and, simply, Mom.


Then Bernadette disappears. It began when Bee aced her report card and claimed her promised reward: a family trip to . But Bernadette's intensifying allergy to Seattle--and people in general--has made her so agoraphobic that a virtual assistant in now runs her most basic errands. A trip to the end of the earth is problematic.

To find her mother, Bee compiles email messages, official documents, secret correspondence--creating a compulsively readable and touching novel about misplaced genius and a mother and daughter's role in an absurd world.

I will admit that I am not a fan of epistolary novels usually because I feel that I can't follow them as easily. But this is why I love blogging, because I am always open to try some new things and find that I can fall in love with something I previously couldn't get through. Where'd You Go Bernadette was this book for me.

Semple does a great job using the different documents to show Bernadette and her family's life in Seattle (obviously with a large focus on what Bernadette is like). It was interesting how among the documents you also get Bee's story and it helps the reader connect with her more than you would through the documents. By telling this story through the many different documents I find that readers are able to get a more intense view of Bernadette and some of the things that she feels that would not be stated otherwise.

I loved Semple's writing and the exaggeration of the elite parents, it made for great humor throughout the story. One of the funniest things mentioned by Bernadette is how Seattle people always wonder about why the weather is so rainy even though everyone else who isn't in Seattle knows that it's known for it's rainy weather. But Semple also has a way of pulling at your emotions as she delves into a dysfunctional family life and how it could affect not only them but others around them.

This book is hard to put down, I found myself pushing through to find out more about Bernadette and learn about her disappearance and see if they ever find her. I really liked the mystery aspect that Semple gives to this story of finding out why Bernadette disappeared, but there is also a great mystery to Bernadette's past.

When it came down to it, the ending was actually my favourite part of this book. Though being sad for the story to end, Semple had the perfect ending to Bee's story of finding her mother. It brought everything together and really made the story.

This was such a fun book to read, Semple has a great sense of humor and really brings it out in her writing. Pick this book up when you're feeling down and it will definitely be a great pick me up.
Posted by Andrea @ Cozy Up at 9:00 AM