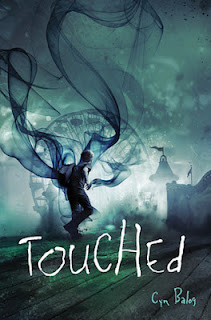 Nick Cross always listens to the voice in his head. Because if he doesn't? Things can go really, really wrong. Like the day he decided to go off script and saved a girl from being run over . . . and let another one drown. Trying to change the future doesn't work.

But this summer at the Jersey Shore, something's about to happen that Nick never could have predicted. He meets a girl named Taryn and finds out about the Book of Touch. Now the path that he thought he was on begins to shift . . . and there's no way to stop things from happening. Or is there?

In a life where there are no surprises, nothing has prepared Nick for what he's about to discover--or the choice he will be forced to make. . . .

This book jumps into Nick's life right from the beginning, readers are thrust into the fact that he is able to see into his future and how it affects him and his mother. The premise of this story is very intriguing, it's interesting to think about how one little change can affect someone's future. The synopsis made me think a little bit of THE BUTTERFLY EFFECT, except that Nick doesn't go back in time, but he sees how his future is changed.

I was really interested in the story of Nick and Taryn and it was interesting to see how everything connected between these two. The story of each of them was slowly brought to the forefront and really changed the story from what I thought it would be. The idea of the Book of Touch added an interesting subplot to the story that I did not see coming and everything that dealt with it brought about some great twists to the story.

I do admit that I felt like there were parts of the book that moved slow. A lot of the book felt like I was watching Nick run around in circles around town but not really getting anywhere. I was expecting a little more action from a book where the main character can see into the future and tries to drastically change things.

I loved the ending of this book of all, it was the biggest twist of all. Nick is desperate to save his family from being hurt and does everything he can. And what ends up happening is a really great change to the story. (Obviously I can't go into more information without giving out major spoilers) But I can say the ending made up for the issues I had with the slow pace of the book, it was a really interesting way to finish the story, and I love that this is a standalone novel (from what I can tell...)
Posted by Andrea @ Cozy Up at 9:00 AM