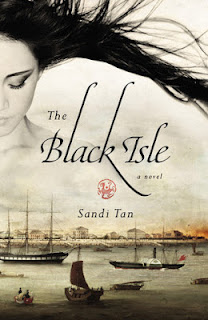 There are ghosts on the Black Isle.

Ghosts that no one can see.
No one...except Cassandra.

Uprooted from Shanghai with her father and twin brother, young Cassandra finds the Black Isle's bustling, immigrant-filled seaport, swampy jungle, and grand rubber plantations a sharp contrast to the city of her childhood. And she soon makes another discovery: the Black Isle is swarming with ghosts.

Haunted and lonely, Cassandra at first tries to ignore her ability to see the restless apparitions that drift down the street and crouch in cold corners at school. Yet despite her struggles with these spirits, Cassandra comes to love her troubled new home. And soon, she attracts the notice of a dangerously charismatic man.

Even as she becomes a fearless young woman, the Isle's dark forces won't let her go. War is looming, and Cassandra wonders if her unique gift might be her beloved island's only chance for salvation . . .

Taking readers from the 1920s, through the Japanese occupation during WWII, to the Isle's radical transformation into a gleaming cosmopolitan city, THE BLACK ISLE is a sweeping epic--a deeply imagined, fiercely original tale from a vibrant new voice in fiction.

So I absolutely love ghost stories, and haven't had a good one in awhile. And the synopsis of this book took my breath away, I was ready to dive in as soon as I got it (I did hold off though). While I did fall in love with this book at the beginning, I began to realize that this story was much more than a ghost story. This story is Cassandra's life story, she tells her story so that people will remember her and what happened in her past.

I have to say Sandi Tan's writing took my breath away. The details are beautiful, and everything is described amazing. From the setting to the people and ghosts around Cassandra I was able to picture everything clearly. At times these descriptions could be quite gruesome, and yet I couldn't tear myself away from this book. This story definitely had some heavy content throughout, it took me quite awhile to read the book (not that I couldn't finish it but there was so much to it), but Tan's descriptions keep her readers glued to the page no matter how horrific the scene is.

The characters were well developed throughout the story. At times I felt a little more interested in some of the secondary characters because of the effects they had on Cassandra's life, some in such drastic ways that you wonder what her life would have been like if she chose a different path.

I also loved how Tan incorporated a lot of Chinese superstitions into the story as well, they really define the lives of some people. The one that had the largest effect on the story was the idea that twins are strongly tied to one another, almost like being soulmates.

The ending really took me by surprise, I was not expecting for it to take the kind of turn. I definitely suggest picking this book up, Tan's writing will keep you invested in this story, even during some of the harder parts.
Posted by Andrea @ Cozy Up at 9:00 AM