Review: The Blondes by Emily Schutlz 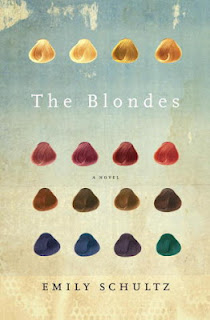 Pages: 400
Received: Received from Random House of Canada in exchange for an honest review

A breakout novel for a young writer whose last book was shortlisted for the Trillium Prize alongside Anne Michaels and Margaret Atwood, and whom the Toronto Star called a "force of nature."

Hazel Hayes is a grad student living in New York City. As the novel opens, she learns she is pregnant (from an affair with her married professor) at an apocalyptically bad time: random but deadly attacks on passers-by, all by blonde women, are terrorizing New Yorkers. Soon it becomes clear that the attacks are symptoms of a strange illness that is transforming blondes--whether CEOs, flight attendants, skateboarders or accountants--into rabid killers.

Hazel, vulnerable because of her pregnancy, decides to flee the city--but finds that the epidemic has spread and that the world outside New York is even stranger than she imagined. She sets out on a trip across a paralyzed America to find the one woman--perhaps blonde, perhaps not--who might be able to help her. Emily Schultz's beautifully realized novel is a mix of satire, thriller, and serious literary work. With echoes of Blindness and The Handmaid's Tale amplified by a biting satiric wit, The Blondes is at once an examination of the complex relationships between women, and a merciless but giddily enjoyable portrait of what happens in a world where beauty is--literally--deadly.

Wow, what to even say about this book. I've been hearing quite a bit about it lately and was definitely intrigued by the hype. The idea of an illness affecting blondes in the world and turning them into killers, I needed to get my hands on this book. The narration of the story hooked me in right away. The whole story is told from Hazel's point of view as she is telling her story to her unborn child. I felt that everything was more descriptive because it's hearing the story told from a first hand point of view.

I really enjoyed how the epidemic is the main idea of the story but the biggest point is how Hazel deals with everything in her vulnerable position. It felt like there were two parallel stories happening. It was interesting to see the back and forth to where she is now and her story of how she dealt with getting there. What I really love about this book is that it Schultz delves deep into the psyche to show how people would react to a disaster like this, it's scary to see what the world turns into.

Schultz did a great job making the disease seem believable, she brings the science out and explains how something like this could be possible. I've read a few books where there is no explanation as to how something happened, and I find it's easier to enjoy the story if you can the author makes it plausible.

We follow Hazel on her journey trying to find the person who will help her through her turmoil in the time of the attacks which are always random. I loved that you could never expect an attack to happen, Schultz shows the unpredictability of the world. The descriptions of things are creepy and really make you want to keep your eyes open throughout the story just waiting for something else to happen. I felt like while I was reading this I would get lost in the story and forget about the attacks and then something big would happen again.

The best part of the book for me was the ending, usually I don't like open endings, but this one just felt right. Schultz really leaves readers wondering what will happen now after Hazel has basically been through hell and back. This is a book I will recommend to everyone I know, it was fun with some great humour and beautiful writing!
Posted by Andrea @ Cozy Up at 9:00 AM