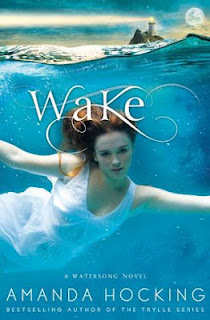 Pages: 309
Received: Received from Raincoast Books in exchange for an honest review

Fall under the spell of Wake—the first book in an achingly beautiful new series by celebrated author Amanda Hocking—and lose yourself to the Watersong.

Gemma seems to have it all—she’s carefree, pretty, and falling in love with Alex, the boy next door. He’s always been just a friend, but this summer they’ve taken their relationship to the next level, and now there’s no going back. Then one night, Gemma’s ordinary life changes forever. She’s taking a late night swim under the stars when she finds Penn, Lexi and Thea partying on the cove. They invite her to join them, and the next morning she wakes up on the beach feeling groggy and sick, knowing something is different.

Suddenly Gemma is stronger, faster, and more beautiful than ever. But her new powers come with a terrifying price. And as she uncovers the truth, she’s is forced to choose between staying with those she loves—or entering a new world brimming with dark hungers and unimaginable secrets.

I never read Amanda Hocking's other books but I've heard a lot of great things about her writing, so picking up her new series was a must for me. I had to see for myself what her writing was like. The book opens up really well, I enjoy the creepiness of the prologue showing what the sirens are like and you see they are determined to get what they want. Hocking does a great job showing these girls to be people you would not want to run into on the street. I also really enjoyed how we learn the story of the sirens, the mythology aspect of this book was done well and the story was very detailed.

The best part of this novel for me was the romance, can I say how amazing it was to see a novel with no love triangle!! Each of the girls has their own love interest (I thought there may have been one coming at one point, but Hocking quickly took that one off the table). The other thing I really enjoyed about the main romance was that you could see where the attraction came from, it wasn't that the guy just suddenly appeared out of nowhere. These two characters grew up next door to one another, they know each other well.

The one thing that struck me as different with this book was that there was a strong family presence throughout. Gemma's dad is very much in the picture and comments on quite a few things. It's nice to see parents actually being there for their teenagers in YA novels, it doesn't happen often enough in my opinion.

There were a few issues I found with the story itself that distracted me a little bit. The first was I found myself confused at times with the narrative. Though the story was told in third person perspective I found that Hocking continually switched back and forth from Gemma to her sister. I found myself taking time to figure out which sister I was with. I also found that the character of Gemma didn't seem to have much emotion in the book, I wanted a little more from her, she is said to be someone who fights back but it wasn't something that was seen much in the book.

I am interested to see what happens in the next book, I'm hoping for a little more action, but I really want to see where Hocking takes the story from here. WAKE was definitely an interesting opening to a new series and a very quick read. This book may not be for everyone but I definitely enjoyed it for the most part.
Posted by Andrea @ Cozy Up at 9:00 AM