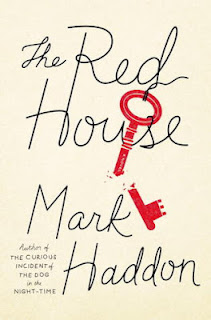 A dazzlingly inventive novel about modern family, from the author of The Curious Incident of the Dog in the Night-time

The set-up of Mark Haddon's brilliant new novel is simple: Richard, a wealthy doctor, invites his estranged sister Angela and her family to join his for a week at a vacation home in the English countryside. Richard has just re-married and inherited a willful stepdaughter in the process; Angela has a feckless husband and three children who sometimes seem alien to her. The stage is set for seven days of resentment and guilt, a staple of family gatherings the world over.

But because of Haddon's extraordinary narrative technique, the stories of these eight people are anything but simple. Told through the alternating viewpoints of each character, The Red House becomes a symphony of long-held grudges, fading dreams and rising hopes, tightly-guarded secrets and illicit desires, all adding up to a portrait of contemporary family life that is bittersweet, comic, and deeply felt. As we come to know each character they become profoundly real to us. We understand them, even as we come to realize they will never fully understand each other, which is the tragicomedy of every family.

The Red House is a literary tour-de-force that illuminates the puzzle of family in a profoundly empathetic manner -- a novel sure to entrance the millions of readers of The Curious Incident of the Dog in the Night-Time.

The synopsis of this book really stuck out to me from the beginning, I've heard only great things about Haddon and thought that this would be an interesting story. I love books that deal with family issues. And yet show the bond that families have through everything.

The idea of this book is placing a dysfunctional family in a cottage where, let's be honest, they're in the middle of nowhere, for a week and really need to deal with many different issues. Haddon delves deep into the minds of these eight characters. I was nervous going into this book knowing that Haddon uses all eight characters as narrators, and it did take me awhile to get into, but in the end I actually got into the different feelings of these people ranging in ages eight to forty.

I did have a few difficulties with the narration because Haddon jumps around quickly from each character and it is not always obvious who is talking. There are times when each character has a paragraph devoted to them and other times there are a few pages. I felt myself losing track easily of who I was reading, but about halfway through I was able to  pick up on slight things that I was able to distinguish the characters easier.

What made this book different from many I have read in the past is that Haddon rarely uses dialogue in his book. There is a bit of conversation between some of the characters but most of the story is told through each of the characters' thoughts and actions. And when the conversations were placed in the book, there was no use of quotations, Haddon instead changes the style of the type to italics.

The characters were difficult to connect with in this novel for me because of how many different POVs were seen throughout. I felt that with this many characters there wasn't time to really get to know any one specific character. Though I did enjoy reading and seeing Angela and Richard (the brother and sister) come together and begin to understand one another.

Haddon writes an interesting tale with THE RED HOUSE, bringing together a family that has many problems and still can come through for one another. Though I had a few issues with this book, it was still enjoyable and emotional at times.
Posted by Andrea @ Cozy Up at 9:00 AM