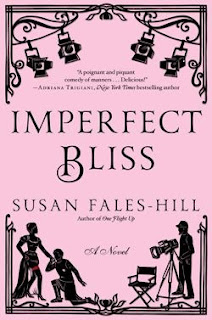 Jane Austen meets the Bachelorette in this twenty-first-century comedy of manners about a suburban family, their four eligible daughters, and what happens when reality TV comes to town. With her acclaimed first novel, One Flight Up, author Susan Fales-Hill is on a roll, already leaving her chick-lit predecessors “in the dust,” as the New York Post put it. Now, in Imperfect Bliss, she offers up a hilarious take on genteel family life with a cast of irresistibly eccentric characters. Meet the Harcourts of . A respectable middle class, middle-aged, mixed-race couple, Harold and Forsythia have four eminently marriageable daughters—or so their mother believes. Forsythia named her girls after royals in the hopes that one day each would find her true prince. But princes are far from the mind of their second-born daughter, Elizabeth (AKA Bliss), who, in the aftermath of a messy divorce, has moved back home and thrown herself into earning her Ph.D. All that changes when a Bachelorette-style reality television show called The Virgin takes Bliss’s younger sister, Diana, as its star. Though she fights it at first, Bliss can’t help but be drawn into the romantic drama that ensues, forcing her to reconsider everything she thought she knew about love, her family, and herself.

From the first line of the synopsis, I was hooked to this book. Jane Austen meets the Bachelorette is a great description of this story. But there is so much more to it as well, in a way this story is about second chances for Bliss. This is a great foray into the chick lit genre that I absolutely love, and yet at the same time it's more than that.

I was reminded a lot of UNDER THE TUSCAN SUN when reading this book (I have only seen the movie though, so I don't know what the book is like). This book shows that the first guy you meet and fall in love with will not necessarily be the perfect man, and that sometimes you have to go through some men to find the right one. Bliss is a character that I admire throughout the novel. She doesn't take it when people insult her, she is one who jumps back with a sarcastic comment.

For me, the most interesting character in the book was the mother of the group, Forsythia. She worked hard to get where she was in life, and wanted the best for her daughters. Many of Forsythia's actions were misunderstood by her daughters, she is the overbearing mother who thinks she knows best, and wants her daughters to marry into the best family possible. Forsythia is definitely a hard person to live with, and someone who is easy to let down. Bella was an adorable character throughout, when she spoke it was adorable and funny (definitely some sarcasm from her mother). But Bella also was a strong character, for a four year old, she has a disability that she has to live with and through everything she learns to get past it and not take what others say to heart.

The TV show The Virgin added a nice bit of humour to the story, but to be honest, that was the part of the story I could have done without. I can see that in a way it is a commentary on how American television "reality" shows have come to make money wherever they can. It just seemed a little overdone, the whole battle for the maiden's heart. I also felt like the show took away from Bliss, who is the MC, and put the focus more on her sister Diana at times.

What I did enjoy was the little history lesson added into the story. You get to learn a few tidbits of Cheavlier de Saint-Georges through Bliss' Ph.D research. I felt like I got to learn some new things through the story, while travelling along with the characters, another thing I wished there was a little more of. I was hoping for a little more travel and more of the characters in different places. They travel to a few places throughout for the show to take place but it wasn't as much as I was expecting it to be.

All in all this was an enjoyable book, despite some of my misgivings about it, I was captivated by the characters in the story. This is one story I flew through and am glad I got to go back to my chick lit love. If you enjoy that genre, this is one story you will defintiely enjoy reading.
Posted by Andrea @ Cozy Up at 9:00 AM