Review: Every Day Every Hour by Natasa Dragnic 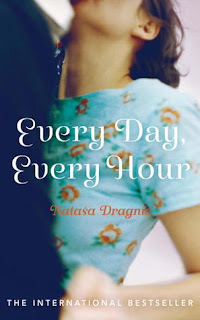 Pages: 272
Received: Received from Random House Canada in exchange for an honest review

An exquisitely romantic debut novel that, like bestsellers The Solitude of Prime Numbers and One Day, captures the longing of lost--and sometimes found--love. Sold in 28 countries worldwide.

In the mid-1960s in a seaside town, Luka and Dora meet on their first day of kindergarten. The two children become inseparable over the next several years, wandering the shores of their town, lying on the rocks by the sea as Luka paints--until Dora's parents move to , taking her with them. Bereft, Luka grows into a solitary young man and a promising painter. Meanwhile, in , Dora blossoms into a successful actress.

Years later, Luka arrives in for a show of his paintings, and by chance he and Dora meet again. Now adults, they fall back in love. Timing and fate, however, seem determined to keep them apart. Natasa Dragnic's Every Day, Every Hour is a haunting tale of star-crossed love that will entrance readers with its exquisite combination of hope and heartache.

Before I started blogging I was all about the chick lit and cute romance stories, and just because I haven't read as many doesn't mean I won't if I find them, this book was right back to my roots. I love books with this kind of idea to them, the whole story of soulmates that just have a hard time keeping their lives picture perfect. I was really excited when I saw this one, especially because it was a translation book. I was a little hesitant going in because it can be hard to keep the voice in translation, but I can tell you this is not a disappointing book whatsoever.

When I started reading this book I was instantly in love with Dragnic's writing style. Her writing is like poetry and she really brings out the emotions of the characters in her words. I'm not usually a fan of poetry (and I'm not saying this is poetry) but it has that poetic feel to it that really works for this novel.

The characters in this book is really what kept me glued to the page, mainly the character of Dora. Both of these characters have their hardships they go through and they still try to come together and beat the odds. Dora was the strong character, who against everything kept fighting for what she believes in, no matter what it is. She hates to give in, and has a stubborn streak when she doesn't get what she wants. Though Luka was not a character that I enjoyed reading, I kept going back to see if he would change (like the synopsis says this is a book about both heartache and hope). Luka was weak and could never face anything that went wrong. He is more of the type that runs away, I mean he faints when he meets Dora for the first time after so many years.

Despite my issues with Luka's character this was one book that I could not get enough of and is now in my top books that I will re-read time and time again (along with The Time Traveler's Wife). There was so much to this book that I was not expecting and Natasa does a great job writing this love story to keep the hope alive amidst all the heartache. This book was absolutely beautiful.
Posted by Andrea @ Cozy Up at 9:00 AM