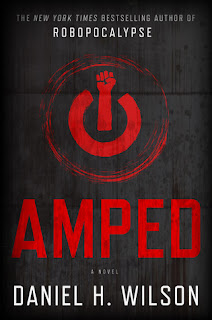 Technology makes them superhuman. But mere mortals want them kept in their place. Enter a stunning world where technology and humanity clash in terrifying and surprising ways.


Some people are implanted with upgrades that make them capable of superhuman feats. The powerful technology has profound consequences for society, and soon a set of laws is passed that restricts the abilities—and rights—of “amplified” humans.

On the day that the Supreme Court passes the first of these laws, 29-year-old Owen Gray discovers that his seizure-supressing medical implant is actually a powerful upgrade. Owen joins the ranks of a new persecuted underclass known as “amps” and is forced to go on the run, desperate to reach an outpost in Oklahoma where, it is rumoured, a group of the most enhanced amps are about to change the world—or destroy it.

I have really enjoyed sci-fi books lately, and if you are a fan, you definitely need to check out Daniel H. Wilson's books. Daniel Wilson turns heads with his writing, and really makes you think about how the world would be in different circumstances. This book is a lot like Wilson's first book ROBOPOCALYPSE, where he deals with the threat of technology. What I really enjoy is how well Wilson is able to write from both perspectives of judgement, those who love technology and those who are completely against it.

The difference of this story that made it stand out a lot for me compared to Wilson's first book was that this story mainly follows one character's journey. I found myself more invested in this story because Wilson wasn't jumping to different parts of the world, you really get to know Owen and the people around him.

I really became invested in Owen's story while reading this. It's interesting to watch him grow and come to terms with him being an actual "amp" rather than just having a medical implant. It's hard to find out everything you're told has been a lie, and that's exactly what Owen deals with, and it makes it harder when it seems that a war is breaking out in the world over this technology. Owen was a great character, I felt in the beginning that I wasn't going to like him, he was a little over-dramatic with finding out he is an "amp", but he definitely suppresses that and comes to be a character to admire.

Wilson does an amazing job with the science aspect of the story, he does not dumb down the book (readers are as smart as you write for them). Wilson gets his readers to see how technology could grow in the future and what kind of things we could do with it. I am a fan of technology and can't wait to see what the future holds and how it will continue to grow.

Science fiction lovers will definitely want to add Wilson's newest to their lists, he brings you into a world that could actually happen in the future.
Posted by Andrea @ Cozy Up at 9:30 AM