Review: This Is Not A Test by Courtney Summers 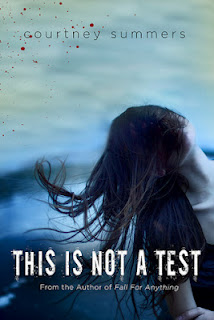 It’s the end of the world. Six students have taken cover in Cortege High but shelter is little comfort when the dead outside won’t stop pounding on the doors. One bite is all it takes to kill a person and bring them back as a monstrous version of their former self.


To Sloane Price, that doesn’t sound so bad. Six months ago, her world collapsed and since then, she’s failed to find a reason to keep going. Now seems like the perfect time to give up. As Sloane eagerly waits for the barricades to fall, she’s forced to witness the apocalypse through the eyes of five people who actually want to live.

But as the days crawl by, the motivations for survival change in startling ways and soon the group’s fate is determined less and less by what’s happening outside and more and more by the unpredictable and violent bids for life—and death—inside.

When everything is gone, what do you hold on to?

I love zombie novels that are dark and creepy, this is exactly what you get from Summers in THIS IS NOT A TEST. Right from the beginning I could tell this was going to be a dark tale, but I had no idea what Summers would do with this story. I was taken on such a ride with this book! Summers did not slow down with the story, every little thing would make you jump.

As I was reading, I kept thinking to myself, this book is so much like THE BREAKFAST CLUB, only 100 times more creepy. You have all the different kids locked together in the school, each with their own different family background, and their own issues.

Summers has amazing writing skills! She does an amazing job detailing Sloane's character. Writing a character who is ready to give up on everything would be hard, but Summers does a beautiful job. I wanted to know more about what Sloane was going through and how she was feeling about everything around her.

What I really found different about this story that was so intriguing was how the zombies were almost like a side note. Yes, the zombies were the reason for these characters being stuck together, but Summers only touched on the zombie part a little bit. This book was about facing fears in a different way. Sloane has to learn how to work with these people who want to live while she is trying everything in her power to just die.

This is not a book to be read at night, it definitely scared me quite often. But Summers takes you into an amazing world. Pick this book up today!
Posted by Andrea @ Cozy Up at 10:00 AM