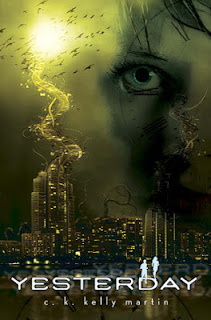 THEN: The formation of the UNA, the high threat of eco-terrorism, the mammoth rates of unemployment and subsequent escape into a world of virtual reality are things any student can read about in their 21st century textbooks and part of the normal background noise to Freya Kallas's life. Until that world starts to crumble.

NOW: It's 1985. Freya Kallas has just moved across the world and into a new life. On the outside, she fits in at her new high school, but Freya feels nothing but removed. Her mother blames it on the grief over her father's death, but how does that explain the headaches and why do her memories feel so foggy? When Freya lays eyes on Garren Lowe, she can't get him out of her head. She's sure that she knows him, despite his insistence that they've never met. As Freya follows her instincts and pushes towards hidden truths, the two of them unveil a strange and dangerous world where their days may be numbered. Unsure who to trust, Freya and Garren go on the run from powerful forces determined to tear them apart and keep them from discovering the truth about their shared pasts (and futures), her visions, and the time and place they really came from. Yesterday will appeal to fans of James Dashner's The Maze Runner, Veronica Roth's Divergent, Amy Ryan's Glow, Laini Taylor's Daughter of Smoke and Bone, and Ally Condie's Matched.

This book surprised me more than I thought it would. I had read a few reviews on it and I wasn't absolutely sure if I would like the book. The first thing that really raises this book in my opinion is that it is set in Toronto and the GTA. I love being able to read a book where I can sit there and follow the characters around because I know the area. This is a great book for those that grew up in the 80's because Martin really roots you into the time. There is so much mention of the television shows and music of the time, that really makes you feel like you are back there (I can't say I know most of it because I'm a 90's baby).

The book opens up with Freya and her family, in THEN, we get a quick glimpse of her life and then we are thrown into 1985 and Freya and her family have just gotten to Canada and are starting a new life after the death of her father. All of a sudden Freya's memories are foggy and she begins having dreams of another time. I really loved all the questions that are brought up in the beginning of the book, wondering who the characters are and what happened to them.

I did find there was a little bit of a disconnect between the first half of the story and the second half when Freya realizes the truth of what happened to her. I did feel like I was reading a different more intense book in the second half, and I actually enjoyed it more. The first half of the book was a little slow going for me because Martin is introducing everything and really making this a mystery book.

Freya was such a strong character throughout, she trusts her instincts and doesn't back down. I really loved her character more than Garren, I found that he wasn't as important and didn't really have as much to do with the story. The ending of this book definitely took me by surprise and left me with so many questions, and it made me like the second half so much more than the first. Martin leaves this story open and I do think that there will be a sequel.

Martin definitely brought us an interesting book with time travel, mystery, and some romance all mixed together. I'm excited to see what will happen next with Freya and Garren.
Posted by Andrea @ Cozy Up at 8:00 AM