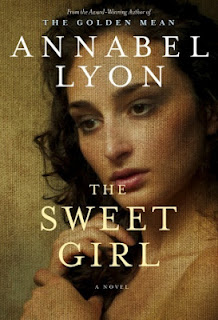 Pages: 256
Source: Received from Random House Canada in exchange for an honest review

A bold and captivating new novel of ancient Greece, from the celebrated, award-winning author of The Golden Mean.

Pythias is her father's daughter, with eyes his exact shade of unlovely, intelligent grey. A slave to his own curiosity and intellect, Aristotle has never been able to resist wit in another--even in a girl child who should be content with the kitchen, the loom and a life dictated by the womb. And oh his little Pytho is smart, able to best his own students in debate and match wits with a roomful of Athenian philosophers. Is she a freak or a harbinger of what women can really be? Pythias must suffer that argument, but she is also (mostly) secure in her father's regard.

But then Alexander dies a thousand miles from Athens, and sentiment turns against anyone associated with him, most especially his famous Macedonian-born teacher. Aristotle and his family are forced to flee to Chalcis, a garrison town. Ailing, mourning and broken in spirit, Aristotle soon dies. And his orphaned daughter, only 16, finds out that the world is a place of superstition, not logic, and that a girl can be played upon by gods and goddesses, as much as by grown men and women. To safely journey to a place in which she can be everything she truly is, Aristotle's daughter will need every ounce of wit she possesses, but also grace and the capacity to love.

I want to start out by saying that you do not need to read THE GOLDEN MEAN to understand what happens in THE SWEET GIRL (I was a little afraid of that when I started). Though I do believe it could be useful at times, it definitely is not necessary. I have always been a huge fan of historical fiction and I'm always interested when I find books like THE SWEET GIRL. I studied a bit of philosophy in university and it was always so captivating.

This story was absolutely enthralling, I loved how Lyon was able to describe Pythias and her relationship with her father, Aristotle. I found myself really connecting with that part because I have such a close relationship with my dad, we do everything together. It was interesting to focus the story on Pythias in a time where women had not rights, I found this to be interesting, watching what Pythias must go through following her father's death. She must try to keep herself safe in a time where most everyone is against her because of her beliefs.

The one thing that was a little disappointing was how short the book ended up being. I felt like I wanted more from the story, I just felt like once Aristotle dies everything seems to move so quickly and then the story just ends.

Lyon does a beautiful job getting her readers to sympathize for Pythias during her journey. She puts herself through everything imaginable just to keep herself and her remaining family afloat. Pythias must deal with the worst of every situation following her father's death and at times it is unsettling seeing what she must do.

Lyon has beautiful writing, and does an excellent job with her research of the time period of her novel. She is able to keep her readers interested in the story as a whole, and even though she writes a perfect ending, I feel like the story itself is too short. I am interested to read THE GOLDEN MEAN to see how everything began.
Posted by Andrea @ Cozy Up at 11:45 AM