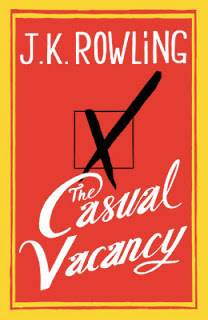 When Barry Fairbrother dies in his early forties, the town of is left in shock.

Pagford is, seemingly, an English idyll, with a cobbled market square and an ancient abbey, but what lies behind the pretty façade is a town at war.

And the empty seat left by Barry on the parish council soon becomes the catalyst for the biggest war the town has yet seen. Who will triumph in an election fraught with passion, duplicity and unexpected revelations?

The Casual Vacancy is J.K. Rowling’s first novel for adults.

I was really excited for this book, it sounded so different from anything I was used to and I really wanted to get out of my comfort zone. Add to that all the hype around this book and I was hooked on getting it as soon as it came out. I have to say I was a little disappointed with what I ended up with (I find that it was mostly because of the hype).

Rowling is an amazing writer and this book shows off her skills at writing about a very realistic world. Her characters are very complex and have so many secrets that I found myself becoming a little more engrossed in the story without realizing it. I will admit though that I had a few issues with this book. I was not expecting the amount of swearing and sex going on in this book. I understand that this is an adult book, but I just felt that it was overdone at times because it was the first adult book for Rowling. I believe that the idea that these characters are disturbed individuals could have been conveyed without overdoing it.

What I really enjoyed about this book is how Rowling shows this little town and how everyone is connected in more ways than they think. This one little event, the death of a councillor affects so many people's lives in different ways. But it was confusing at times because there were so many different characters each with their own narrative (I believe it was 15). I felt like the story jumped from character to character at times and some of them were not as important as others.

Though I was a little disappointed with a few things about this story it was an interesting idea, and I will admit that I cried at the ending, after everything that happened in this large book it was a shock for it to end the way it did. After reading a lot of books that are more of the supernatural idea, it was nice to read a book that was more realistic. I just found that it was overdone for my taste, I love my adult books but I find that for them to be adult they don't need an over-abundance of swear words to make it an adult book. I do believe that it was an interesting story though, very political, and it takes awhile to get into the story. I know I had to push myself through the first part of the story before I found myself more interested in what was happening with the characters.

I would suggest giving this book a try but be warned that this is a book full of swearing and quite a lot of lewdness to it.
Posted by Andrea @ Cozy Up at 11:34 AM