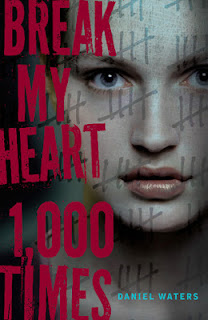 Living in the aftermath of the Event means that seeing the dead is now a part of life, but Veronica wishes that the ghosts would just move on. Instead, the ghosts aren't disappearing--they're gaining power.

When Veronica and her friend, Kirk, decide to investigate why, they stumble upon a more sinister plot than they ever could have imagined. One of Veronica's high school teachers is crippled by the fact that his dead daughter has never returned as a ghost, and he's haunted by the possibility that she's waiting to reappear within a fresh body. Veronica seems like the perfect host. And even if he's wrong, what's the harm in creating one more ghost?

From critically acclaimed Generation Dead author Daniel Waters, comes a delectably creepy and suspenseful thriller. Break My Heart 1,000 Times will leave readers with the chills. Or is that a ghost reading over the page?

This book really got my attention and is definitely a fun read for right around Halloween. Readers are taken into a world where seeing ghosts around is a natural thing, they are walking around everywhere. This book is more than a ghost story though, there is another sdie story of a serial killer, which really became the forefront of this book.

What was really interesting about this book was the many different narratives, showing the different sides of the story, and the idea that one of the narratives is a ghost trying to fix things. The story moves along pretty slowly and it does take some time to get into the creepy parts. But parts of this story will give you chills.

Though you know who the murderer is as you read the story it is fun to watch as the story unfolds for the other characters and there is still a lot to the story that you don't know or understand that slowly unravels as you go along. Every scene that included this teacher is disturbing because you have an idea of what is coming, and yet at the same time Waters still surprises you.

This is a fun read for Halloween, really taking it's time to get to the big event that creeps you out, the main thing that disappointed me with this book was that there was mention of "The Event" throughout but no mention of what actually happened (at least not that I found... maybe I missed something though...) But what was interesting was the research that the characters put in to finding out the different reasons behind the ghosts' appearances. I do think the story takes some time to get into but in the end it is worth the time.
Posted by Andrea @ Cozy Up at 8:00 AM