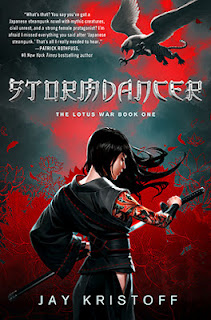 Pages: 337
Received:Received from publisher through NetGalley


A DYING LAND
The Shima Imperium verges on the brink of environmental collapse; an island nation once rich in tradition and myth, now decimated by clockwork industrialization and the machine-worshipers of the Lotus Guild. The skies are red as blood, the land is choked with toxic pollution, and the great spirit animals that once roamed its wilds have departed forever.

AN IMPOSSIBLE QUEST
The hunters of Shima’s imperial court are charged by their Shōgun to capture a thunder tiger—a legendary creature, half-eagle, half-tiger. But any fool knows the beasts have been extinct for more than a century, and the price of failing the Shōgun is death.

A SIXTEEN YEAR OLD GIRL
Yukiko is a child of the Fox clan, possessed of a talent that if discovered, would see her executed by the Lotus Guild. Accompanying her father on the Shōgun’s hunt, she finds herself stranded: a young woman alone in Shima’s last wilderness, with only a furious, crippled thunder tiger for company. Even though she can hear his thoughts, even though she saved his life, all she knows for certain is he’d rather see her dead than help her.

But together, the pair will form an indomitable friendship, and rise to challenge the might of an empire.

So this book ended up taking me a lot longer to read than I expected it to. And I blame that on the fact that I was reading an e-book version. I feel like I would have understood what was happening a lot more and not been so hesitant to continue reading it if I had a hard copy. My main problem was the use of a lot of Japanese names for things that I didn't know what was being talked about (there is a glossary at the end of the book, which is why it was harder reading this as an ebook). I also had a few issues with the names of the characters, I found myself getting confused trying to figure out who I was with at a certain time (but I also attribute this to my taking so much time away from reading this book).

I was really intrigued from the beginning of the book, it starts out with an amazing beginning chapter that draws you in and makes you need to read the rest of the book to know what will happen. I always love a book that can grip you from the first page, I find that more books these days are quite slow going and you need to read on before getting into some of the bigger ideas. And though the story does slow down a little after the first chapter, Kristoff still adds in a lot of great action scenes to keep you interested and coming back to the story. And the world Kristoff created is amazing! Readers are transported into a world where it is dangerous to breathe the air and everyone has secrets.

What really kepot me coming back to the story was the friendship between Yukiko and Buruu (the thunder tiger). I loved how the slowly grow on each other and begin to have such strong faith in one another. A lot of the interactions between those two were amusing and you can see how they grow together. I found that I wasn't very interested in the story after the prologue until the point that we actually learn about Yukiko's history and when we finally meet the thunder tiger. I mean any book is better once you have something that is like a griffin introduced, the story can only get better from that point on (and this story definitely did!)

The ending of this book was amazing, and in my opinion made up for a lot of my issues I had when I started this book. I was so taken with everything that I found myself going back to the book more often just to find out what Yukiko would do in her situation. I really loved the huge fighting scenes at the end that keep you wanting more from the book.

Despite all my issues I really enjoyed this book. This is one book I recommend with it's great world building and characters who really capture your attention. But I do suggest if you pick this book up to pick up a hardcopy rather than buying it for you eReader, it will be so much easier to get into the story.
Posted by Andrea @ Cozy Up at 8:00 AM