Review: No Relation by Terry Fallis 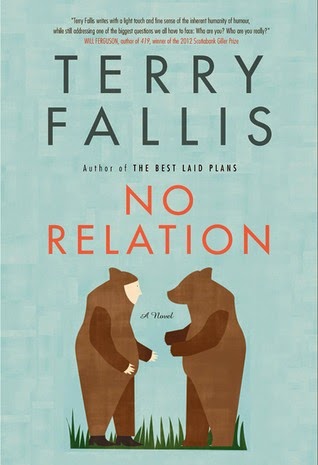 In his fourth novel, winner of the 2011 Canada Reads competition and "CanLit's crowned king of chuckles" (Telegraph-Journal) Terry Fallis's sharp, funny wit takes readers into the world of identity, inheritance, and belonging, begging the question: What's in a name?

This is the story of a young copywriter in . He's worked at the same agency for fifteen years, and with a recent promotion under his belt, life is good. Then, one morning this copywriter finds himself unceremoniously fired from his job, and after he catches his live-in girlfriend moving out of their apartment a couple hours later, he's also single. Believe it or not, these aren't the biggest problems in this copywriter's life. There's something bigger, something that has been haunting him his whole life, something that he'll never be able to shake. Meet Earnest Hemmingway.

What's in a name? Well, if you share your moniker with the likes of some of the most revered, infamous, and sometimes dreaded names in history, plenty. This is Earnest's lifelong plight, but something more recent is on his plate: His father is pressuring him to come home and play an active role in running the family clothing business. And as a complex familial battle plays out, Earnest's inherited name leads him in unexpected directions. Wry, clever, and utterly engaging, No Relation is Terry Fallis at the top of his form.

Oh gosh, what to say about this book. This was my first Terry Fallis book but I can guarantee it will not be my last! I remember hearing about this book a little while ago from Lindsey, and she is one that when a book is recommended to me I take that and run with it! I am really glad that I listened, because this book was so much fun to read. This story really brings up the question of "What is in a name?"

The main character of the book is Earnest Hemmingway, not to be confused with the author (his name has an "A" and an extra "M" to make the distinction). He has a very difficult time in life because people are always making jokes about his name, and add to that he wants to be a writer, growing up was not the easiest. Now he finds himself in a very tough situation, just having lost his job and his girlfriend has broken up with him (in the same day), he is really trying to get his life back together and be happy.

This was such a fun book, the journey Earnest takes to really find himself amidst all his family problems and the trouble he runs into along the way, are funny and heartwarming. The secondary characters are absolutely amazing, and there would be no story without them. Earnest really finds help in this support group that he makes up for people with the same name as famous people. I have to say my favourite was Mahatma Gandhi, he added so much humour with his outbursts and yet he was such a sweetheart who would do anything for those around him.

The family aspect of the book was interesting as well, Earnest is years older than his sister and they have a very awkward relationship, but you can see over the course of the novel the growth. These two really come to understand one another better and begin to work through their problems and rely on one another through difficult times.

The best part of the book though was the journey that Earnest takes to try to help clear his writer's block, the things he learns along the way not only about himself but about Ernest Hemingway really make this story what it is. I cannot wait to start giving this book out to people and see their reactions because I just wanted more of all these characters. Definitely a book that will be brought out time and time again.
Posted by Andrea @ Cozy Up at 7:00 AM