Review: The Confabulist by Steven Galloway 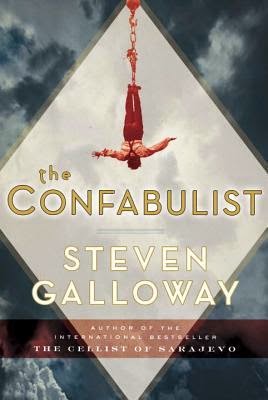 From the beloved, award-winning, bestselling author of The Cellist of Sarajevo, a beautiful, suspense-filled novel that uses the life and sudden death of Harry Houdini to weave a magical tale of intrigue, love and illusion.

The Confabulist weaves together the life, loves and murder of the world's greatest magician, Harry Houdini, with the story of the man who killed him (twice): Martin Strauss, an everyday man whose fate was tied to the magician's in unforeseen ways. A cast of memorable characters spins around Houdini's celebrity-driven life, as they did in his time: from the Romanov family soon to be assassinated, to Sir Arthur Conan Doyle and the powerful heads of Scotland Yard, and the Spiritualists who would use whoever they could to establish their religion. A brilliant novel about fame and ambition, reality and illusion, and the ways that love, grief and imagination can alter what we perceive and believe.

When reading that this story was about Harry Houdini, I jumped at the chance to be able to check it out. This story switches between two different stories, one of Harry Houdini and the other of Martin Strauss, who is coming to terms with killing Houdini and finally telling the story. Steven Galloway weaves these two characters and their stories together in such an intriguing way that you can't help but immerse yourself in the book.

Honestly, I had a lot of fun with this book, it definitely takes some dark turns at points, but the story is so intriguing. I really enjoyed learning about Houdini's life and I really loved how a lot of the story revolves around this mystery of Martin Strauss. There is so much to this story, and it really isn't all that long of a book. There are some great people that add to this story, I really loved the interactions between Sir Arthur Conan Doyle and Houdini the most. The ideas that come up in this book are so astounding and yet they really make this book as magical as it is.

It's interesting to see how many of the magical tricks Houdini does are explained, showing readers that he truly is just a regular person and not some magical creature with special abilities. His life revolves around so much fame and ambition, taking him too far at times. This book also shows how grief can alter how we perceive things around us and can completely change the situation. Houdini proves this time and again in his parts.

Martin's story is something completely different, he is led to believe that he has killed Houdini and he travels around to find out more about his history. I think Martin's part of the story was confusing, yet was such a great mystery that kept me coming back to the story. There is too much to talk about and give away, this is the type of book that has such beautiful writing and keeps you reading. I definitely want to read his other book now that I have experienced what his writing style is like. The fact that this book was all about Harry Houdini and his life really made it that much more amazing.
Posted by Andrea @ Cozy Up at 7:00 AM