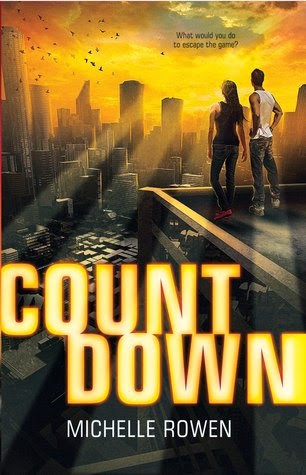 3 seconds left to live. Once the countdown starts, it cannot be stopped.

Kira survived her family's murder and months on plague-devastated city streets with hard-won savvy and a low-level psi ability. She figures she can handle anything. Until she wakes up in a barren room, chained next to the notorious Rogan Ellis.

1 reason Kira will never, ever trust Rogan. Even though both their lives depend on it.

Their every move is controlled and televised for a vicious exclusive audience. And as Kira's psi skill unexpectedly grows and Rogan's secrets prove evermore deadly, Kira's only chance of survival is to risk trusting him as much as her instincts. Even if that means running head-on into the one trap she can't escape.

This story starts right away in a very intense moment between Kira and Rogan. Readers are instantly thrown into the game of Countdown and as the story moves along we learn more about the history and what happens in the game. At one point in the beginning I had flashbacks from the SAW movie franchise (though not as sickening as those challenges, this is still a very dangerous game where you are really playing for your lives).

Each level of this game becomes more dangerous for the players and they need to decide if they will do everything to win not only their dreams but their lives as well. Kira and Rogan were both interesting characters with very opposite personalities and I think it made the story work so well. They both are very sarcastic people and the way they act help them through the game itself. The one thing I really enjoyed about Kira was that she is someone who has been relying on herself for so long, she is a bit self-centered (though it's an understandable flaw), but she is tough from being on the streets. The only thing was it seemed that she didn't grow much over the course of the story, I wanted her to learn a little more from the game.

I really think this was an interesting story with some interesting twists that really kept me guessing about what was real and who could be trusted throughout the game.This was an intense book, but it followed a lot of similar storylines, you could see the romance coming and I kind of felt like it was a bit forced and over the top. But other than that I did really enjoy this book, and loved how intense Michelle Rowen made some of the scenes, surprising readers with the things that these characters were forced to go through.
Posted by Andrea @ Cozy Up at 7:00 AM