Review: The Girl Who Saved the King of Sweden by Jonas Jonasson 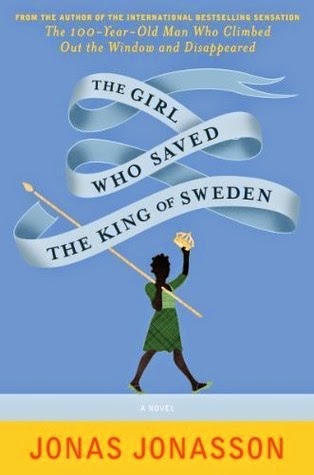 On , the king and the prime minister of went missing from a gala banquet at the royal castle. Later it was said that both had fallen ill, but the truth is different. The real story starts much earlier, in 1961, with the birth of Nombeko Mayeki in a shack in . Nombeko was fated to grow up fast and die early in her poverty-stricken township, be it from drugs, alcohol, or just plain despair. But Nombeko takes a different path. She finds work as a housecleaner and eventually makes her way up to the position of chief advisor, at the helm of one of the world's most secret projects.

Here is where the tale merges with then diverges from reality. developed six nuclear missiles in the 1980s, then voluntarily dismantled them in 1994. This is the story of the seventh missile, the one that was never supposed to have existed. Nombeko Mayeki knows too much about it, and now she's on the run from both the South African justice system and the most terrifying secret service in the world. The fate of the planet now lies in Nombeko's hands.

Jonasson introduces us to a cast of eccentrics: a nerve-damaged American Vietnam deserter, twin brothers who are officially only one person, three careless Chinese girls, an angry young woman, a potato-growing baroness, the Swedish king and the prime minister. Quirky and utterly unique, The Girl Who Saved the King of Sweden is a charming and humorous account of one young woman's unlikely adventure.

I had heard so much about Jonasson's book The 100-Year-Old Man Who Climbed Out the Window and Disappeared when I heard he had a new book coming out I knew I needed to read it. I have to say this was such a fun and unique story, Jonas's characters will capture readers and the story is so over the top that you can't stop until you know what happens next!

The story is the type that follows the paths of many different people, but it is how all these people come together to make the story that really keep the reader invested. Nombeko was such an intriguing character, I loved her growth over the course of the book (which for the record takes place over a large amount of years). I really adored Nombeko's smarts and how she is able to get herself out of such precarious situations. For someone who is uneducated, she has a lot of smarts and knows how to formulate a plan (though it never seems to work for the long-term).

And as much as I loved Nombeko's character, the story would not be what it is without the multitude of secondary characters that Nombeko meets over the years. Everyone has their own quirks that add to everything, and I think if Nombeko never met any of these characters the story would not take the turn it does. From the drunken engineer who is in charge of the missiles, to the group of people that she ends with, you love every person you meet. Each of the quirks everyone has adds such a comedic undertone to the book that I was giggling through the entire book even at some of the more "intense" moments (if you could call them that).

Everything about this book is so over-the-top and that is what makes it so enjoyable. Jonas Jonasson creates a story with a cast of characters that will keep you hooked and laughing at all the little things, from one bad situation to the next, they all come with a side of comedy. I want more from Jonasson, his stories are the reason I read so much, escape reality for a little while, and this story is so charming and eccentric that I always wanted to pick it up after a long day!
Posted by Andrea @ Cozy Up at 7:00 AM