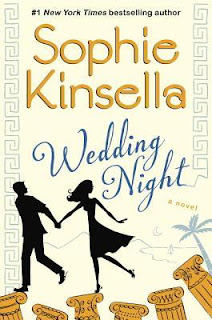 Lottie just knows that her boyfriend is going to propose during lunch at one of London’s fanciest restaurants. But when his big question involves a trip abroad, not a trip down the aisle, she’s completely crushed. So when Ben, an old flame, calls her out of the blue and reminds Lottie of their pact to get married if they were both still single at thirty, she jumps at the chance. No formal dates—just a quick march to the altar and a honeymoon on Ikonos, the sun-drenched Greek island where they first met years ago.

Their family and friends are horrified. Fliss, Lottie’s older sister, knows that Lottie can be impulsive—but surely this is her worst decision yet. And Ben’s colleague Lorcan fears that this hasty marriage will ruin his friend’s career. To keep Lottie and Ben from making a terrible mistake, Fliss concocts an elaborate scheme to sabotage their wedding night. As she and Lorcan jet off to Ikonos in pursuit, Lottie and Ben are in for a honeymoon to remember, for better . . . or worse.

So let me be honest, I got this book because it's Sophie Kinsella... I will read anything she writes, all her books are so light-hearted and a great read when you're looking for a pick me up. So when I heard she had a new book out, I jumped at the chance to read it. Wedding Night was exactly what I would expect from Sophie Kinsella, a lot of humour and the most awkward things that would probably never happen in real life happening.

I have to say that I was really excited that some of this book would be taking place on a Greek island, I love books set in such romantic places (somewhere where I would love to visit). It wasn't until halfway through the book that we actually came to the islands though, and I was hoping for a little more adventure on the island, rather than these two at the hotel for the most part. I will say though, that I loved the descriptions of the beaches and it made me want summer so much more.

The characters of this book are different from many of Sophie's other characters, for the most part they all got on my nerves for one reason or another. None of these characters had that great of an attitude, but I think the way that these characters mixed together made the story enjoyable despite not liking them. Lottie is the typical main character, she has a tendency to go off the rails after a break up and then do the most ridiculous thing, her latest being getting married to someone she hasn't seen for fifteen years. The book goes back and forth between the points of view of Lottie and Fliss.

Fliss is Lottie's older sister who has always been taking care of Lottie because their parents weren't really in the picture when they were younger. So when Lottie goes off the rails and decides to marry this random guy no one has met, Fliss jumps to action trying to do anything to stop their amazing wedding night and talk some sense into Lottie. For me, I could see where Fliss was coming from, she has a whole back story dealing with divorce and she doesn't want to see her sister go through the hardships of it. I have to say that some of the ridiculous things that are done to keep Lottie and Ben from having their wedding night are quite amusing, though at times I felt like it went over the top and no one would try some of those things. There is one point where peanut oil is used so that Lottie will have an allergic reaction (that's just cruel).

I knew where this book would end, but I thought a lot of it was cute and the ending was just adorable and had me giggling. I won't say that this is my favourite of Sophie Kinsella's books because I think there were quite a few times that it went over the top, but if you're a fan of her writing, you will definitely enjoy this cute story of finding out how to really find love.