Review: The Start of Everything by Emily Winslow 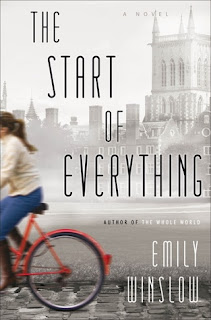 Pages: 254
Received: Received a copy through the BookDepository affiliate program

In this stunning psychological thriller for readers of Tana French, Kate Atkinson, and Donna Tartt, Emily Winslow has crafted a literary prism told through the eyes of her many intricately drawn characters. Masterly and mesmerizing, The Start of Everything will captivate until the very last page.

“If you don’t want to see me again, say so. But it’s not right to say nothing. It’s not right to go silent. You know what to do.”
: Outside the city, the badly decomposed body of a teenage girl has washed up in the flooded fens. Detective Inspector Chloe Frohmann and her partner, Morris Keene, must work quickly to identify the victim before the press takes off with the salacious story.

Across the hallowed paths and storied squares of , the detectives follow scant clues toward the identity of the dead girl. Eventually, their search leads them to Deeping House, an imposing country manor where, over the course of one Christmas holiday, three families, two nannies, and one young writer were snowed in together. Chloe Frohmann begins to unravel a tangled web of passions and secrets, of long-buried crimes and freshly committed horrors. But in order to reveal the truth—about misaddressed letters, a devastating affair, and a murdered teenager—she may have to betray her partner.

Since I've started blogging I haven't read many mystery type books, and I used to really love psychological thrillers. This one definitely had me interested, I liked the idea of the different characters all with a different goal but all ending up in the same places. There are a lot of different perspectives in this book that made it a little more difficult for me to get through. I found it required a lot more focus than I was really invested in.

My main issue was following this story, Winslow does not write this story in a linear way, it is divided into three different parts as the detectives come closer to solving the mystery of this murdered young woman. Each part has a narrative from each of the detectives and from one other character, each with something to do with this mystery. The opening part was very confusing and I found myself needing to go back and reread sections often to understand what exactly was happening. What made it difficult was the way the characters spoke and saw things, especially the character of Mathilde. I found her perspective the most difficult because it takes some time before readers understand that she is autistic (and truly it is never actually stated, just hinted at).

Also with each of these narrators, there are many more characters that they interact with, causing this book to have a very large cast and becoming a little more difficult to follow. Many of the secondary characters were imperative to the story as well, so it's not like they could be cut out of the story. I will say that it is difficult to write a story with so many characters and not get confused, but the way Emily Winslow wrote this story made it easier for the reader to understand who you were with and where you were in regards to the story.

Each of the narrators has a problem of some sort, I really liked the characters (even though I couldn't identify with them). They were real people and were nowhere near perfect. I really think that added to the story in a very interesting way. I really enjoy books where the characters are flawed, and add that to a murder mystery and that is what kept me going despite my issues of connection.

The mystery itself was a very interesting one, and I was really surprised at the turn of events. When everything was finally revealed it was shocking and definitely unseen. Though this book is difficult to get into, I think the mystery and the twists that Emily Winslow adds in are worth checking out. And for me a book with flawed characters is definitely one that should get attention. I just advise to take your time with the book and really focus on everything that is happening or you will get lost very quickly.
Posted by Andrea @ Cozy Up at 6:00 AM